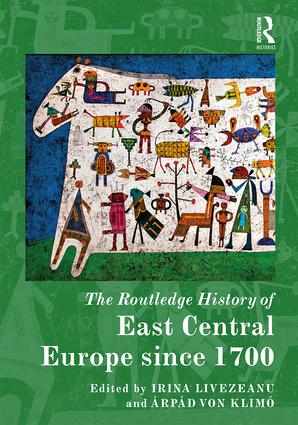 The Routledge History of East Central Europe since 1700

Covering territory from Russia in the east to Germany and Austria in the west, The Routledge History of East Central Europe since 1700 explores the origins and evolution of modernity in this turbulent region. This book applies fresh critical approaches to major historical controversies and debates, expanding the study of a region that has experienced persistent and profound change and yet has long been dominated by narrowly nationalist interpretations.

Written by an international team of contributors that reflects the increasing globalization and pluralism of East Central European studies, chapters discuss key themes such as economic development, the relationship between religion and ethnicity, the intersection between culture and imperial, national, wartime, and revolutionary political agendas, migration, women’s and gender history, ideologies and political movements, the legacy of communism, and the ways in which various states in East Central Europe deployed and were formed by the politics of memory and commemoration. This book uses new methodologies in order to fundamentally reshape perspectives on the development of East Central Europe over the past three centuries.

Transnational and comparative in approach, this volume presents the latest research on the social, cultural, political and economic history of modern East Central Europe, providing an analytical and comprehensive overview for all students of this region.

"The Routledge History of East Central Europe offers a comprehensive, yet concise introduction to the history and historiography of the region, while also featuring some of the latest research and methodological innovation in the field. The book brings together an excellent team of historians from Europe and North America, representing some of the best recent work on the political, economic, gender, and cultural history of East Central Europe. Collectively, the diverse thematic chapters deliver a compelling narrative of three centuries of turbulent history in a region that was the epicenter of conflict between imperial and national forms of identification and governance. As the authors demonstrate through a full range of conceptual lenses, empire and nation themselves were historical artifacts, both shaped by and actively shaping economic, gender, political, demographic, and cultural history."

"This impressive survey of the territory between German lands and those of Russia, including the Balkans, treats history and historiography. It is fully abreast of current scholarship and methodology, clearly written by a first-rate international team of contributors whose own research is evident, shows the region in all its complexities, and is well edited by Livezeanu (Univ. of Pittsburgh) and von Klimó (Catholic Univ.)."

"The volume manages to convey and reflect on several of the dominant historiographic trends and key research findings in the English-language scholarship of recent decades, and it presents a rich, thoughtful, and accessible new history of a highly complex region over three centuries."

"In terms of general conclusions, the volume has achieved its objective of becoming a reference work. It gives due weight to recent historiographical developments, as additionally reflected in the chapter endnotes and suggestions for further reading. Moreover, the authors take the welcome liberty of providing thought-provoking vignettes, which should be stimulating for established practitioners and especially graduate students. All told, this would be more than a worthwhile purchase for a research library…"

"Scholars of the field and their graduate students will want this book on their office shelves. It is a pleasure to read a synopsis of the region that tries to de-essentialize east central Europe by appropriately highlighting constant change and development."

2 – Rural and Urban Worlds: Between Economic Modernization and Persistent Backwardness

8 – Communism and Its Legacy

9 – Returning to ‘Europe’ and the Rise of Europragmatism: Party Politics and the European Union since 1989

Irina Livezeanu is Associate Professor of modern European history at the University of Pittsburgh, USA. Her research has focused on culture and politics in twentieth-century Romania and Moldova. She is the author of Cultural Politics in Greater Romania: Regionalism, Nation Building, and Ethnic Struggle, 1918-1930 (1995). Her articles have appeared in Soviet Studies, Südosteuropa-Jahrbuch, Austrian History Yearbook, East European Politics & Societies, and La Nouvelle Alternative, among others. Her essays have been published in collective volumes in France, Romania, Britain, and the USA. She is past president of the Society for Romanian Studies, and co-editor of the Studii Româneşti/Romanian Studies/Études Roumaines/Rumänische Studien book series at Polirom in Iaşi, Romania.

is Associate Professor of History at The Catholic University of America in Washington, DC, USA. His courses cover Modern Europe since 1789 and the History of Catholicism in the Global Age. He has published and conducted extensive research on nineteenth- and twentieth-century Hungarian, Italian and German social history. Recently, he also completed a monograph on the memory of World War II and the Holocaust in Hungary, focusing on the Novi Sad massacre of 1942 (Remembering Cold Days, 2017). His current project is on world-wide Catholicism and Anti-Communism during the second half of the 1970s, focusing on the figure of Cardinal József Mindszenty.