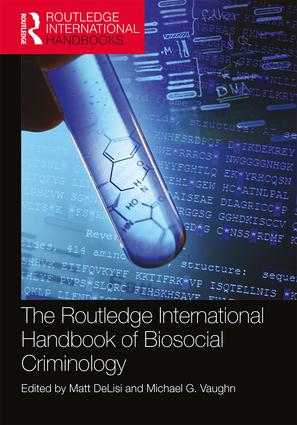 Biosocial criminology is an interdisciplinary field that aims to explain crime and antisocial behavior by exploring both biological factors and environmental factors. Since the mapping of the human genome, scientists have been able to study the biosocial causes of human behaviour with the greatest specificity.

After decades of almost exclusive sociological focus, criminology has undergone a paradigm shift where the field is more interdisciplinary and this book combines perspectives from criminology and sociology with contributions from fields such as genetics, neuropsychology, and evolutionary psychology. The Routledge International Handbook of Biosocial Criminology is the largest and most comprehensive work of its kind, and is organized into five sections that collectively span the terrain of biosocial research on antisocial behavior.

Bringing together leading experts from around the world, this book considers the criminological, genetic and neuropsychological foundations of offending, as well as the legal and criminal justice applications of biosocial criminological theory, and will be essential reading for students, researchers, and practitioners from across the social, behavioural, and natural sciences who are engaged in the study of antisocial behaviour.

‘The biosocial revolution has broken through the gates of resistance erected by traditional criminology, offering rich opportunities for transforming the criminological enterprise. For those wishing to join this revolution - or simply to understand it - DeLisi and Vaughn's Handbook is an indispensable resource. The breadth and depth of this volume are impressive; it is a work that should be kept close at hand and consulted regularly.’ - Francis T. Cullen, Distinguished Research Professor, University of Cincinnati, USA

‘Biosocial criminology has expanded by leaps and bounds since its origins and the field continues to evolve. Fortunately for criminologists of all stripes, DeLisi and Vaughn have amassed a who's-who of internationally-acclaimed scholars who are at the forefront of biosocial criminology. The key topics are covered and reviewed well, but more importantly the chapters are filled with nuggets for future theoretical and empirical research that is sure to serve as a model guide for students and academics alike. The editors are to be commended for spearheading a must-have volume that should be on every shelf.’ - Alex R. Piquero, PhD, Ashbel Smith Professor of Criminology, The University of Texas at Dallas, USA

‘This comprehensive Handbook clearly brings out the increasing importance of biosocial research for criminology and criminal justice. Written by leading biosocial scholars, it is very wide-ranging, including not only fundamental research, but also implications for policy and practice. It should be required reading for all criminologists.’ - David P. Farrington, Emeritus Professor of Psychological Criminology, Cambridge University, UK

'The rise of biosocial criminology represents the most important paradigm shift criminology has ever experienced. DeLisi and Vaughn’s book fully captures the scholarly diversity and intellectual excitement that accompany and propel this transition. Readers of DeLisi and Vaughn’s book will not only come away better informed about biosocial criminology, they will come away inspired.’ - John Wright,Professor of Criminal Justice, University of Cincinnati and King Abdullhziz University, Jeddah Saudi Arabia

Michael G. Vaughn is Professor in the School of Social Work at Saint Louis University. Professor Vaughn is Fellow of the Society for Social Work and Research and author of more than 250 scholarly works.