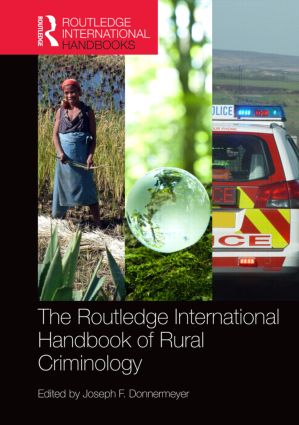 49% of the world’s population lives in small towns, villages and farms, yet until recent years criminological scholarship has focused almost exclusively on urban crimes. The Routledge International Handbook of Rural Criminology is the first major publication to bring together this growing body of scholarship under a single cover. For many years rural criminology has remained marginalized and often excluded from the mainstream, with precedence given to urban criminology: this volume intends to address that imbalance.

Pioneering in scope, this book brings together leading international scholars from fourteen different countries to offer an authoritative synthesis of theoretical and empirical literature. This handbook is divided in to seven parts, each addressing a different aspect of rural criminology:

Edited by a world renowned scholar of rural criminology, this book explores rural crime issues in over thirty-five countries including Japan, Sweden, Brazil, Australia, Tanzania, the US, and the UK. This is the first Handbook dedicated to rural criminology and is an essential resource for criminologists, sociologists and social geographers engaged with rural studies and crime.

"At last … a wonderfully comprehensive and truly international text on rural criminology that showcases contemporary scholarship at its very finest. Issues relating to rural criminology have been marginalised for far too long and this impressive handbook will no doubt help scholars, students, policy-makers and practitioners to recognise the significance of these issues. A remarkable accomplishment by the editor and a much needed resource for criminologists all over the world."

With this path-breaking collection, the broad topics of rural criminology are assembled in one impressive handbook. Joseph F. Donnermeyer has succeeded in bringing together highly varying and relevant contributions from well-known and upcoming scholars in the field who convincingly show why rural criminology has always been and should remain a central part of criminology. This book also reflects a global criminology, as the chapters focus on cases from a wide range of countries and relate to many aspects of crimes, whether affecting humans or non-humans. It is highly recommended for scholars no matter which field they define themselves within."

"Rural crime is very significant today, and once exceeded urban crime! Indeed, towns were originally built to escape rural banditry. Alcohol abuse was originally greater in rural areas. Only later in history did cities grow and create anonymity, with transport systems bringing beer, whiskey, rum, and vodka to urban places. Metropolitan areas depend on the hinterland to provide drugs and other crime opportunities. Any crime specialist who ignores this book is making a big intellectual and scientific mistake."

Part I: Rurality and Crime

6. The Importance of Context: Understanding the Nature of Anti-social Behaviour in Rural Scotland (Andrew Wooff)

7. From Myth to Myth: Rural Criminology in France (Christian Mouhana)

9. Homies of the Corn: Gangs in the Rural Environment (Angela Glosser)

10. The Nomadic Pastoralist, the Fisherman and the Pirate: A Historical Overview of the Rural Dimensions of Piracy in Somalia (Victoria E. Collins)

15. Human Trafficking, Labor Exploitation, and Exposure to Environmental Hazards: The Abuse of Farmworkers in the US (Kelle Barrick)

18. Crime and Violence Outside the Metropole: An Australian case study (Russell Hogg and Kerry Carrington)

22. Corruption and Land Use Expropriation in Rural China (Qingli Meng)

Part IV: Drug Use, Production and Trafficking in the Rural Context

26. Approaching rural drug issues from the perspective of community psychology: The relevance of community-mindedness in peer-oriented intervention (Anke Stallwitz)

27. Methamphetamine and the Changing Rhetoric of Drugs in the United States (William Garriott)

Part V: The Intersection of Rural and Green Criminologies

33. Jumping From the Frying Pan into the Fire: A Criminological Study of Forest Firesetting in Spain (Rafa Salvador)

36. Policing the Countryside in a Devolving United Kingdom (Richard Yarwood and Andrew Wooff)

42. Lessons for Scholarizing from Contributions to the International Handbook of Rural Criminology (Joseph F. Donnermeyer)

Joseph F. Donnermeyer is Professor Emeritus of Rural Sociology at Ohio State University. He is the co-author of Rural Criminology with Walter S. DeKeseredy (Routledge, 2013).