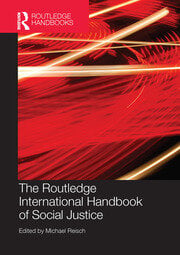 In a world where genocide, hunger, poverty, war, and disease persist and where richer nations often fail to act to address these problems or act too late, a prerequisite to achieving even modest social justice goals is to clarify the meaning of competing discourses on the concept. Throughout history, calls for social justice have been used to rationalize the status quo, promote modest reforms, and justify revolutionary, even violent action. Ironically, as the prominence of the concept has risen, the meaning of social justice has become increasingly obscured.

This authoritative volume explores different perspectives on social justice and what its attainment would involve. It addresses key issues, such as resolving fundamental questions about human nature and social relationships; the distribution of resources, power, status, rights, access, and opportunities; and the means by which decisions regarding this distribution are made. Illustrating the complexity of the topic, it presents a range of international, historical, and theoretical perspectives, and discusses the dilemmas inherent in implementing social justice concepts in policy and practice. Covering more than abstract definitions of social justice, it also includes multiple examples of how social justice might be achieved at the interpersonal, organizational, community, and societal levels.

With contributions from leading scholars around the globe, Reisch has put together a magisterial and multi-faceted overview of social justice. It is an essential reference work for all scholars with an interest in social justice from a wide range of disciplines, including social work, public policy, public health, law, criminology, sociology, and education.

Michael Reisch is the Daniel Thursz Distinguished Professor of Social Justice at the University of Maryland, USA. He has published and presented widely on the history and philosophy of social welfare, social justice and multiculturalism, community organization, the non-profit sector, and contemporary policy issues, such as poverty, health care, welfare reform, and the impact of globalization on social welfare. In 2014, Professor Reisch was awarded the Council on Social Work Education's Significant Lifetime Achievement in Social Work Education Award.

‘Michael Reisch has brought together leading experts on social justice to produce a profoundly important book that ranges comprehensively over the field. Covering theoretical, practice, policy and international aspects, it is an invaluable resource which should be a part of every thoughtful scholar’s library.’ – James Midgley, Harry & Riva Specht Professor of Public Social Services, University of California, Berkeley, USA

‘What could one more book about "social justice" tell us that has not already been said? After reading the Routledge International Handbook of Social Justice the answer is quite simple: Quite a lot! Editor Michael Reisch and 36 other scholars, advocates, and activists present in one volume, multiple perspectives and experiences on the histories, theories, and applications of social justice in a variety of cultural contexts across the globe. From presentations of analyses, debates, and dilemmas and explorations of poetry, musings, and music, each thoughtfully written essay is replete with its own wealth of new ideas and references. Early on, Reisch quotes Michelangelo to say "I am still learning". With texts like this Handbook available to us now, thankfully we all are still able to learn!’ – Darlyne Bailey, Dean and Professor, Graduate School of Social Work and Social Research, Bryn Mawr College, USA