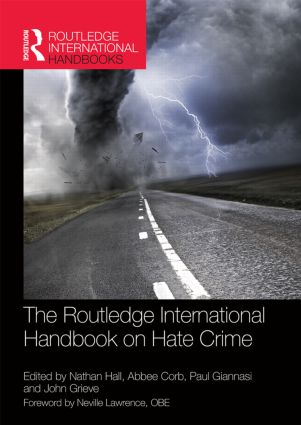 This edited collection brings together many of the world's leading experts, both academic and practitioner, in a single volume handbook that examines key international issues in the field of hate crime. Collectively it examines a range of pertinent areas with the ultimate aim of providing a detailed picture of the hate crime 'problem' in different parts of the world. The book is divided into four parts:

Offering a strong international focus and comprehensive coverage of a wide range of hate crime issues, this book is an important contribution to hate crime studies and will be essential reading for academics, students and practitioners interested in this field.

‘Hate crimes are a global problem and a serious human rights challenge that require a comprehensive response from governments and other stakeholders wherever they occur. This Handbook is an important new tool in the formulation of policies to combat hate crime, offering the latest thinking from top experts on the nature, incidence and impact of hate crime, as well as an honest account of the progress made and challenges that remain in law enforcement, criminal justice, and other policy responses to these crimes and the intolerance in which they are rooted.’ - Paul LeGendre, Human Rights First, USA

‘You do not have to agree with all the conclusions of the experts who contributed to this important book to recognize that it is an invaluable tool for officials who help set policy vis-à-vis hate crimes, as well as the frontline officers who have to deal with the impact of hate on diverse communities.’ - Rabbi Abraham Cooper, Associate Dean of the Simon Wiesenthal Center, USA

Nathan Hall is a Principal Lecturer in Criminology and Policing at the Institute of Criminal Justice Studies at the University of Portsmouth. He is a member of the Cross-Government Hate Crime Independent Advisory Group (IAG) and the Association of Chief Police Officers Hate Crime Working Group. Nathan has also acted as an independent member of the UK government hate crime delegation to the Organization for Security and Co-operation in Europe, and is a member of the Crown Prosecution Service (Wessex) Independent Strategic Scrutiny and Involvement Panel, Hampshire Constabulary’s Strategic IAG, and the Metropolitan Police Service’s Hate Crime Diamond Group.

Abbee Corb works as a consultant with the law enforcement and intelligence services within Canada and abroad. Abbee provides educational instruction to law enforcement and government agencies around the world and she is also a university professor. She has a PhD in Criminology and bears the designation of CMAS (Certified Master Anti-Terrorism Specialist). Abbee has been working in the field of hate and extremism for over 20 years and began her career dealing with Internet-based hatred and right wing extremists. She also worked dealing with Nazi War criminals for almost 10 years. Abbee is a court-qualified expert on hate and extremism, specifically as it applies to the online environment. She has produced three award-winning films dealing with hate crime, is a published author and is periodically called upon by the Canadian media and pro-active community-based organizations as a consultant on right-wing extremism. Abbee is also an expert on countering violent extremism and hate crime. Paul Giannasi is a Police Superintendent, working within the Ministry of Justice in the United Kingdom. He leads a cross-governmental hate crime programme which brings all sectors of government together to coordinate efforts in order to improve the response to hate crime from across the criminal justice system. Paul is the UK ‘National Point of Contact’ to the Organisation for Security and Cooperation in Europe (OSCE) on hate crime and has worked to share good practice within the OSCE region and within Africa. Paul is also a member of the Association of Chief Police Officers (ACPO) Hate Crime Group and is one of the authors of the Police Hate Crime Manual, which provides guidance to UK police officers and their partners.

joined the Metropolitan Police in 1966 at Clapham and served as a police officer and detective throughout London, in every role from undercover officer to policy chair for over 37 years. His duties involved the Drugs, Flying , Robbery and Murder Squads senior investigator. He was also the borough commander at Bethnal Green and head of training at Hendon Police College and was the first Director of Intelligence for the Metropolitan Police. He led the Anti-Terrorist Squad as National Co-ordinator during the 1996-1998 bombing campaigns and created the Race and Violent Crime Task Force. In the latter role he was responsible with others for the creation and development of the Cultural Change, Critical Incident and Community Impact models for strategic crisis management. He retired in May 2002.