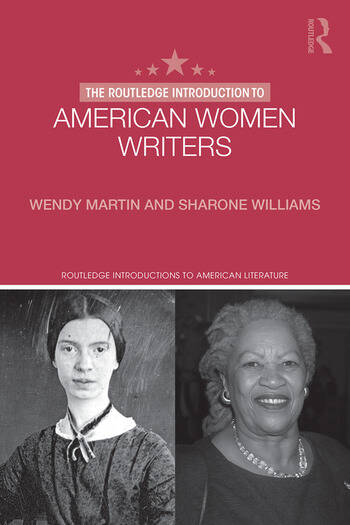 The Routledge Introduction to American Women Writers considers the important literary, historical, cultural, and intellectual contexts of American women authors from the seventeenth century to the present and provides readers with an analysis of current literary trends and debates in women’s literature. This accessible and engaging guide covers a variety of essential topics, such as:

The volume examines the ways in which women writers from diverse racial, social, and cultural backgrounds have shaped American literary traditions, giving particular attention to the ways writers worked inside, outside, and around the strictures of their cultural and historical moments to create space for women’s voices and experiences as a vital part of American life. Addressing key contemporary and theoretical debates, this comprehensive overview presents a highly readable narrative of the development of literature by American women and offers a crucial range of perspectives on American literary history.

has a PhD in American Literature and is the Managing Editor of Women’s Studies: An Interdisciplinary Journal.

"With The Routledge Introduction to American Women Writers, Wendy Martin and Sharone Williams have contributed an authoritative, yet succinct, volume that presents the rich contributions of American women to the literatures of the United States from the seventeenth century to the twenty-first. The accessible prose and impeccable scholarship combine to make this an important study and reference text for both beginning students and seasoned teachers. Martin and Williams place the complex history, literary production, and cultural achievement of women writers seamlessly into the multifaceted fabric of American writing.  Informative and engaging, it is one of the best books to guide readers through a gendered understanding of literary and cultural history. What further distinguishes the meticulously contextualized and judiciously focused analytical narrative is the thoughtful inclusion of a broad range of writers from multiple ethnic, racial, social, and political groups. African American, Asian American, Native American, Chicana, and Latina writers are situated, along with American women of British and European descent, as integral to the evolving periods, movements, poetics, and practices characterizing an American literature."

"This book does all it promises and more, presenting a dazzling range and variety of American women's literary expression--and along the way giving a crash course in close to four centuries of American history and culture. Its broad coverage and brisk lucid prose belie literary readings that are consistently subtle and complete. That rare creature, a study of both breadth and depth, The Routledge Introduction to American Women Writers is an invaluable resource and scholarly model for students and teachers alike."

"The Routledge Introduction to  American Women  Writers is a  clear, comprehensive, and compact guide to American women’s writing from the colonial period to the present.  Martin and Williams skillfully locate the literature of American women in the multiple contexts of American  history, transnational literary movements,  and American cultural movements. They provide an astute analysis of the  controversies and trends in American literary studies, and take note of the current important developments in digital technology, ePublishing, social media, graphic fiction, popular genres, and young adult writing. This is an indispensable overview for students and scholars of the American women’s literary tradition."

"In this remarkably concise and deeply informed survey of America's women writers,  Wendy Martin and Sharone Williams beautifully expand our awareness of America's literary history. Moving deftly from Anne Bradstreet to Adrienne Rich, from Harriet Jacobs to Marilynne Robinson, the authors have shown that for the past four hundred years woman authors have triumphed in every literary genre. For students and teachers of world literature, this book is a required text."