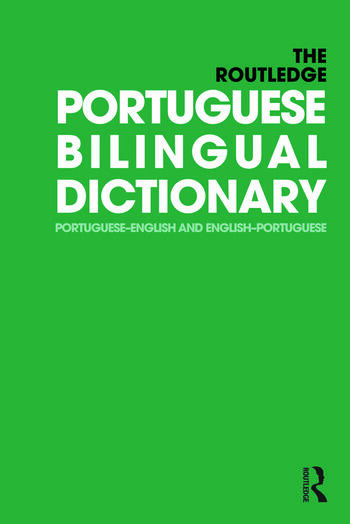 Thoroughly revised in 2014, this compact and up-to-date two-way dictionary provides a comprehensive and modern vocabulary. It is the ideal reference for all users of Portuguese.

The dictionary includes an extensive coverage of practical terminology from a diversity of fields including; business and economics, law, medicine and information technology as well as common abbreviations, toponyms (place names), nationalities, numerous idiomatic expressions and slang.

The Routledge Portuguese Bilingual Dictionary provides the maximum information in the minimum space, making it an invaluable reference source

Maria F. Allen has lectured for 30 years in the School of Languages at the University of Westminster. She developed and co-ordinated the Portuguese -Language and Culture courses, as well as teaching the prestigious PG/MA Conference Interpreting course from Portuguese into English and other Latin idioms. Also for the UoW Maria Allen has taught the PG/MA Technical and Specialized Translation into English, for 21 years, (covering areas such as economics, legal, medicine, etc); also PG bilingual translation and other courses. She is a Fellow of the Chartered Institute of Linguists and a former member of its Council, currently a member of its Translation, Interpreting and Business Divisions. She was a member of the Associação Internacional de Lusitanistas and a member of Iberian Studies Association.

'A new up to date modern Portuguese dictionary like this one is long overdue.  It will no doubt be an invaluable constant companion for all translators and interpreters working in the Portuguese language who are often required to know much more than ordinary dictionaries provide such as everyday informal and familiar expressions used by Portuguese and English speakers all over the world' - Patricia von Simson, Chartered Linguist, Translator and Interpreter

‘This remarkable work is an encyclopaedia as well as a dictionary. It not only lucidly explains words and the colloquial use of language but takes the user on a fascinating journey through the worlds of Portuguese, Brazilian and British cultures.’ - Malyn Newitt, Emeritus Professor, King’s College London

‘This new dictionary, a distillation of many years of work by a well known lecturer and a highly-skilled translator with a love for language and a clearly demonstrated knowledge of both Lusophone and English language culture, will prove an invaluable and much needed addition to the bookshelf of students at every level, and of professional translators work-ing between the two languages. Its author is to be congratulated for condensing so much information into a user-friendly format whose content goes far beyond that of many dictionaries, including technical terms, examples of correct usage and idiomatic expressions, national variants and cultural notes. The inclusion of the most recent orthographical changes in Portuguese ensure that it will remain an invaluable reference work for many years to come.’ - Dr. J. Flannery, Lecturer and Translator

‘...there is a great deal of value packed into its compact format…This eminently practical dictionary, by a scholar and highly experienced teacher of Portuguese, will find many users- students, translators and others.’ The Linguist

'…this new dictionary is a very welcome contribution towards redressing the comparative under-representation of Portuguese on the shelves of language bookshops in this country.

One of the main difficulties in studying languages with a global presence, such as Portuguese, is that divergences inevitably arise in different parts of the world. However, this dictionary clearly identifies differences between Brazilian Portuguese and European Portuguese, and it also reflects the orthographic changes which were recently agreed between Portugal and Brazil.

This dictionary is also thoroughly up-to-date, which makes it an invaluable source of reference in a world where linguistic change is occurring at an ever-increasing speed.’ Ian Hancock, Translator

'I recently purchased this dictionary and I must say that it is the best of its kind I have ever found….a masterly piece of work.’ David Madell, Translator, Member of the Chartered Institute of Linguists and the Institute of Translation and Interpreting