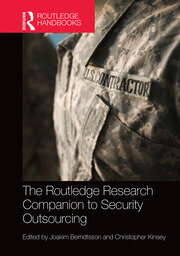 Conveniently structured into five sections, The Routledge Research Companion to Outsourcing Security offers an overview of the different ways in which states have come to rely on private contractors to support interventions.

Part One puts into context the evolution of outsourcing in Western states that are actively involved in expeditionary operations as well as the rise of the commercial security sector in Afghanistan. To explain the various theoretical frameworks that students can use to study security/military outsourcing, Part Two outlines the theories behind security outsourcing. Part Three examines the law and ethics surrounding the outsourcing of security by focusing on how states might monitor contractor behaviour, hold them to account and prosecute them where their behaviour warrants such action. The drivers, politics and consequences of outsourcing foreign policy are covered in Part Four, which is divided into two sections: section one is concerned with armed contractors (providing the provision of private security with the main driver being a capability gap on the part of the military/law enforcement agencies), and section two looks at military contractors (supporting military operations right back to antiquity, less controversial politically and often technologically driven). The final Part takes into consideration emerging perspectives, exploring areas such as gender, feminist methodology, maritime security and the impact of private security on the military profession.

This book will be of much interest to students of military and security studies, foreign policy and International Relations.

Part I: The Outsourcing Context: the Evolution of Security Outsourcing

2. Outsourcing Military Logistics and Security Services: the Case of the UK, Christopher Kinsey

4. Coercion and Capital in Afghanistan: The Rise, Transformation and Fall of the Afghan Commercial Security Sector, Christian Olsson

5. A "Pacifist" Approach to Military Contracting: How German History Explains its Limited Use of Private Security Companies, Birthe Anders

7. Money for nothing? Contractor Support from an Economic Perspective, Eugenio Cusumano

9. Outsourcing and Risk: From the Known to the Unknown, Elke Krahmann

11. Contractors and the Law of Armed Conflict, Malcolm H Patterson

16. The Contractor as the New Cosmopolitan Soldier, Andreas Krieg

17. Is it Ethical for States to Prevent their Citizens from Working as TCN Military and Security Contractors?, Deane-Peter Baker

18. What is driving the Outsourcing of Diplomatic Security?, Eugenio Cusumano and Christopher Kinsey

19. Reconfiguring Power and Insecurity in the Afghan context: The Consequences of Outsourcing Security in High Risk Societies, Ase Gilje Østensen

23. The Culture of Whiteness in Private Security, Amanda Chisholm

24. The Issue of Gender and Armed Contractors, Jutta Joachim and Andrea Schneiker

Joakim Berndtsson is a Associate Professor at the School of Global Studies, University of Gothenburg, Sweden.

'This volume presents a comprehensive selection of the latest research analyzing the challenges, complexities, and ambiguities surrounding the diverse state of strategic outsourcing of private security to conflict settings. Anyone curious about how this crucial development has dramatically transformed the global security landscape would find this to be an invaluable reference.' -- Robert Mandel, Lewis & Clark College, USA

‘An essential reader’s guide to security outsourcing in high risk or conflict environments, bringing together established and new scholars from a variety of disciplines to focus on how and why governments decide to use market rather than public actors in dealing with international security challenges. It is a refreshing and original contribution to the field of the privatisation of security that will appeal to academic, policy and general audiences.’ -- Christopher Dandeker, King’s College London, UK