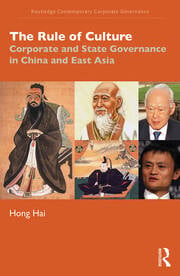 The Rule of Culture: Corporate and State Governance in China and East Asia

Culture has an abiding influence on the way countries and business corporations are governed. This book introduces the reader to the deep philosophies that drive corporations and governments in East Asia, from China through Japan and South Korea to Singapore. With sparkling clarity and spiced with anecdotes and case studies, it depicts how respect for cultures can lead to spectacular success, or the lack of it to failure. Confucian practices such as guanxi in Chinese society, the benevolent culture of entity firms in Japan, and patriarchal chaebols in South Korea are analyzed with examples like Esquel, Nissan, and Samsung. A delightful chapter on Daoism shows how it drives Jack Ma’s Alibaba.com.

In the governance of nations, the author reinforces Burke’s dictum that systems of government must be consonant with traditional cultures, and he calls out misguided attempts by the West to foist liberal democracies on civilizations in the East where respect for authority and communitarian values come before individual interest. The author advances the novel concept of the meritocratic democracy in which leaders are chosen not by electoral popularity but by proven ability. In a thought-provoking concluding chapter, he evaluates prospective constitutional changes in China that would enshrine meritocratic democracy as an alternative to liberal democracies that have turned dysfunctional in many Western nations.

1. From Huangdi to Xi Jinping

6. Culture and Changing Governance in Korea

Hong Hai was Professor and Dean of the College of Business at Nanyang Technological University, where he is now Adjunct Professor. He has been a Member of the Singapore Parliament and chief executive of Haw Par Corporation, and published in economics, philosophy, and Chinese history.

“In this compact volume on culture and governance in China and East Asia, Hong Hai covers a wide field simply and succinctly. It is eminently readable and provides the best single short introduction to the region that I have come across. He paints in broad strokes covering a wide landscape with surprising depth. For some parts, he sketches interesting details which enhance and strengthen the overall presentation.
It is remarkable how Hong Hai is able to explain diverse subjects – from the philosophy of Confucianism, Taoism, Buddhism to the leadership styles of Mao Tse-Tung, Deng Xiaoping and Lee Kuan Yew, to the success of companies like China’s Alibaba, Japan’s Toyota, Korea’s Samsung and Hong Kong’s Esquel, to recent scandals involving foreigners brought into companies like Olympus and Nissan – in a way which make them all cohere and explicable against the history and culture of the chopsticks peoples.
For those wishing to understand more deeply the backdrop of China’s and East Asia’s response to the actions of the Trump Administration, this quick read can be very helpful.” — George Yeo, Chairman, Kerry Logistics Network and Visiting Scholar, Lee Kuan Yew School of Public Policy, National University of Singapore. Mr Yeo served with distinction in the Singapore government cabinet, holding among others the key posts of Minister for Foreign Affairs and Minister for Trade and Industry.

“Drawing on a wealth of research and years of experience in academia, business, and politics, Professor Hong Hai persuasively argues for the importance of culture in East Asia. He not only shows how culture affects the workings of economic and political organizations: he also shows how modernized interpretations of traditional values can make those organizations work better in the future.” — Daniel A. Bell, Dean of the School of Political Science and Public Administration at Shandong University and Professor at Tsinghua University; author of The China Model.

“The 21st century will be the Asian century. Asia’s success has been driven by a dynamic fusion of the best from the East and the West. We know well how the West transformed the world. We know little about how Asia’s resurgence was driven by its own cultures and values.
In this volume, Hong Hai, a deep student of Asian history and culture, has distilled well the key elements of Asian cultures and shown how they relate to successful corporate practices as well as state governance in dynamic Asian economies. Those who want to get a glimpse of the Asian century should dive into this book.” — Kishore Mahbubani, Distinguished Fellow, Asia Research Institute, National University of Singapore, and author of Has The West Lost It? Professor Mahbubani previously served as Dean of the Lee Kuan Yew School of Public Policy and has written and lectured extensively on Asian affairs and China–US relations.

“In this book Professor Hong has presented us with a deft and gentle interrogation of authoritarian regimes across East Asia, from the largest (China) to the very smallest (Singapore). He has consciously adopted the perspective of a cultural and political insider and in doing so he has brought a different quality to that of an overt critic and cultural outsider like myself. Those looking for the rhetorical flourish that delivers a fatal wound to an opponent will be disappointed, but if you want to read an empathetic interrogation of the shortfalls in East Asian authoritarian governance – argued mostly in terms of its own goals and ideological rationales – then you should be well pleased with this offering.” — Michael Barr, Associate Professor of International Relations, College of Business, Government and Law, Flinders University; Associate Editor, Asian Studies Review and author of Singapore: A Modern History (2019). Professor Barr has written extensively on Singapore politics and authored a much-cited political biography of Lee Kuan Yew.

“Increasingly there is realization that culture has a profound effect on the success or failure of nations and companies. In recent history, liberal democracy survived and appeared to have worked best among the different options of governance but is starting to see decline all over the world. China and East Asian nations are re-adopting Confucianism. Hong Hai has analysed examples of how Confucian culture has led to successful governance of countries where a majority are oriental people. An excellent read to understand what is happening the world over.” — Inderjit Singh, Chairman, NTU Innovation Centre and former Member of Parliament, Singapore.

“Especially interesting is his argument that Confucian values still resonate in many 21st-century East Asian countries. He also explores the ideal of a ‘meritocratic democracy’ in these countries while cognisant of the reality of authoritarian tendencies in their governance. Hong Hai writes: ‘It is important for authoritarian governance not to have a cruel edge, and for the people in such regimes to realize that there are orderly means to remove a bad leader.’ This is indeed a tantalizing thought and a good prescription for all ‘emperors,’ states, societies and firms, Confucian or otherwise.” — Lam Peng Er, Senior Research Fellow, East Asian Institute, National University of Singapore. Dr Lam is a specialist in Japanese politics and society, and has also written extensively on Singapore history and politics.

“The book contains the distilled experiences of the author who has had a distinguished career in politics, academia and the corporate world. Taking a broad sweep of the business practices and state governance in China, Japan, South Korea and Singapore, he offers insights through the lens of Confucianism, Daoism and their national histories. The gem of the book is the discussion of the novel concept of meritocratic democracy which draws on the best talents to run the country rather than those who are popular with the masses. Such democracies tend toward benevolent authoritarianism but do not always enjoy universal suffrage; some have been successful and merit study.” — Michael Heng, former Professor of management and author of The Great Recession: History, Ideology, Hubris and Nemesis.

“In light of China's remarkable rise and the recent seeming dysfunction of Western liberal democracies, the debate on governance has assumed ever greater import. Specifically, does China have political wisdom to share with the West? Is Confucian governance workable only in its land of origin or can it be applied universally? Hong Hai draws from his broad training and experience in economics, philosophy, politics and business to shed light on the question of whether governance is culture- and history-dependent. Based on a successful course he taught at Nanyang Technological University, Hong Hai’s book is rich with insights on Confucian virtue and its impact on corporate and state governance in Asia. It is a must-read for academics, businesspeople and policymakers facing a changing world order.” — Michael Tai, Professor of East Asian Studies at the Beijing Institute of Technology in Zhuhai and Fellow of the Royal Asiatic Society of Great Britain and Ireland; author of US–China Relations in the Twenty-First Century: A Question of Trust.

“In these troubled times of bitter rivalry among superpowers and questionable corporate and political governance practices, and with the advent of artificial intelligence and 5G communications, Hong Hai’s new book evokes Dickensian characterization. It seems to be the best of times, the worst of times, the age of wisdom, of foolishness, of belief, and of incredulity. Hong Hai painstakingly reflects on cultural history in search of a moral vision to illuminate pitfalls in corporate and political governance. He challenges the false dichotomy between democracy and the authoritarian state as often purveyed by the Western media. With increasingly dysfunctional liberal democracies in the West as the backdrop, he explores how ‘meritocratic democracy’ may be a viable alternative. His arduous search for a secure and hospitable foundation for governance is very commendable.” — Chua Lee Beng, Educational Consultant, was a faculty member of Dartmouth College and the Harvard Graduate School of Education.