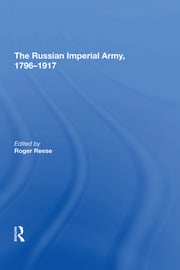 The majority of the articles assembled in this volume reflect social-historical methodology, which is used to show the relationship between the tsarist army and society while focusing on the Russian historical experience. In each case, whether it be a study of the soldiers as peasants, alcoholism, the nationalities, officers, military justice, social and legal reform and mutiny or revolution, the inescapable conclusion arises that the army was at all times a reflection of the many social problems, aspirations, or political thought of the broader imperial Russian civil society. In short, this anthology treats the Russian military as a window on the symbiotic triangular relationship between army, state and society.

Contents: Introduction. Part I The Napoleonic and Post-Napoleonic Years, 1796-1855: Military justice and social relations in the prereform army, 1796-1855, Elise Kimerling Wirtschafter; The mutiny of the Semenovsky regiment, Joseph L. Wieczynski; The Russian military colonies, 1810-31, Richard E. Pipes; The army of Nicholas I: its role and character, John Shelton Curtiss; The Russian army's use of Balkan irregulars during the 1828-29 Russo-Turkish War, Alexander Bitis. Part II Post-Crimean War to the Eve of the First World War, 1856-1914: Reform in the Russian army, 1856-61, E. Willis Brooks; Subject nationalities in the military service of imperial Russia: the case of the Bashkirs, Robert F. Baumann; Peasants in uniform: the Tsarist army as a peasant society, John Bushnell; Russian officer training in the 1860s-70s: the Helsinki Yunker school, J.E.O. Screen; The Tsarist officer corps, 1881-1914: customs, duties, inefficiency, John Bushnell; Russian officer corps before the revolution: the military mind, Peter Kenez; The formation of the Russian general staff, 1880-1917: a social study, Matitiahu Mayzel; Alcoholism in the Russian military: the public sphere and the temperance discourse, 1883-1917, George E. Snow; A pioneer of Russian strategic thought: G.A. Leer, 1829-1904, Peter Von Wahlde; The revolution of 1905-06 in the army: the incidence and impact of mutiny, John Bushnell. Part III World War and Revolutions: The Russian mobilisation in 1914, L.C.F. Turner; Changes in the social composition of the officer corps during World War I, Peter Kenez; The imperial Russian Life Guards Grenadier Regiment, 1906-17: the disintegration of an elite unit, David R. Jones; The February revolution in the Russian army, Allan Wildman; The Russian soldier in 1917: undisciplined, patriotic, and revolutionary, Marc Ferro; The Russian general staff and the June 1917 offensive, Robert S. Feldman; The officers and the October Revolution, David R. Jones. Part I