The Russian Revolution in Retreat, 1920–24
Soviet Workers and the New Communist Elite 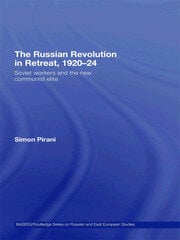 The Russian Revolution in Retreat, 1920–24: Soviet Workers and the New Communist Elite

The Russian revolution of 1917 was a defining event of the twentieth century, and its achievements and failures remain controversial in the twenty-first. This book focuses on the retreat from the revolution’s aims in 1920–24, after the civil war and at the start of the New Economic Policy – and specifically, on the turbulent relationship between the working class and the Communist Party in those years.  It is based on extensive original research of the actions and reactions of the party leadership and ranks, of dissidents and members of other parties, and of trade union activists and ordinary factory workers. It discusses working-class collective action before, during and after the crisis of 1921, when the Bolsheviks were confronted by the revolt at the Kronshtadt naval base and other protest movements.

This book argues that the working class was politically expropriated by the Bolshevik party, as democratic bodies such as soviets and factory committees were deprived of decision-making power; it examines how the new Soviet ruling class began to take shape. It shows how some worker activists concluded that the principles of 1917 had been betrayed, while others accepted a social contract, under which workers were assured of improvements in living standards in exchange for increased labour discipline and productivity, and a surrender of political power to the party.

Simon Pirani studied Russian at the University of London and wrote a doctoral dissertation at the University of Essex. He writes about the economy and politics of the former Soviet Union as a journalist. He is currently a senior research fellow at the Oxford Institute for Energy Studies, and is working on book projects on the post-Soviet period.

"This powerful book takes a close look at the relationship between the Bolshevik party and the democratic aspirations of rank-and-file workers in Moscow in the crucial early years of the Russian revolution. Simon Pirani’s prodigious utilization of local party and secret police archives allows him to show how the Bolshevik party leadership systematically destroyed democratic voices on the shop floor: the party offered a "social contract" that promised improving standards of living in exchange for the loss of a political voice. Paying close attention to the material reality of the post-revolutionary period and to moments of intense shop floor dissent, this book goes beyond Robert Daniels’s classic The Conscience of the Revolution in emphasizing the importance of independent and non-party socialist worker activists. He instructs careful readers about the complex, fragile thing called democracy, exploring its origin and demise in economically and politically fraught conditions of revolutionary change."

University of Illinois at Urbana-Champaign

"Why did the Russian revolution, a mass uprising for justice and democracy, end in a single Party dictatorship?   This gripping tale of workers in revolution and retreat is essential reading for anyone interested in an answer.  Pirani follows Russian workers as they seize power, fight for a democratic revolution, and lose to a Bolshevik Party bureaucracy intent on consolidating control.  Using exciting new sources, Pirani takes us into the factories of Moscow to understand relations among activists, workers, bureaucrats, and a multiplicity of revolutionary parties."