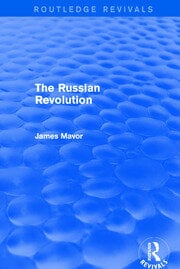 The revolutionary movements of 1905-1907 formed the first stage of the Russian Revolution, followed by an interval of peace and economic prosperity, but the outbreak of WWI and social unrest led to further revolutionary action in 1917 resulting in the abdication and murder of Tsar Nicholas II and the creation of the Soviet Union. Originally published in 1928, this volume traces the course and the consequences of the Revolution with Mavor emphasising the economic aspect of the Revolution as the main cause of the upheaval, considering political and military affairs in so far as their relation to the course of economic development. This title will be of interest to students of history and economics.

Preface;  Introduction;  Book I: The Interval of Peace, The European War, and The Collapse of the Dynasty;  1. The Autocracy and the People  2. The Interval of Peace, 1907-1914  3. The European War and its Immediate Economic Effects Upon Russia  4. The Revolution of February-March 1917, the Formation of the Provisional Government, and Abdication of the Tsar;  Appendix A;  Appendix B;  Book II: The Dual Authority of the Provisional Government and the Petrograd Council of Workmen’s and Soldiers’ Deputies;  1. The Provincial Government and the Revival of the Soviets  2. The Coalition Government and its Struggles Against ‘Direct Action’ by Peasants and Artisans  3. The Working of the Soviets, Unsuccessful Bolshevik Attempts to Overthrow the Provincial Government; Appendix  C; Book III: Military, Social, and political Disintegration in Russia and the Rise of the Bolsheviks ; 1. Demoralization of People and Army and the Beginning of the Dissolution of the Russian Empire  2. The Kerensky-Kornilov Affair and the Crumbling of the Front  3. ‘All Power to the Soviets’  4. ‘Red October’: The Preparation  5. ‘Red October’: The Explosion  6. The Separate Armistice  7. The Constituent Assembly  8. Brest-Litovsk  9. The Labour Army  10. The Russian People and the Revolution;  Book IV: The Social Revolution and Its Problems;  1. The Characters and Ideology of the Bolsheviks and the Development of Their Policy;  Appendix D;  2. Problems of Power;  Appendix E;  3. The Administration of Justice Under the Soviet Republics  4. The Presidium of the All-Russian Soviet of People’s Economy  5. The Concrete Economic Plan of the Bolsheviks  6. The Nationalization of Industry and its Consequences  7. Obligatory Labour, Normalizing Production, and the System of Rationing  8. The Co-Operative Movement and the Soviet Republic  9. The Civil Wars, Chiefly in Relation to their Economic Consequences  10. The Red Terror;  Book V: Economic Crisis, Collapse of Communism, and the New Economic Policy;  1. The Economic Crisis of the Winter of 1920-1921 and the Famine of 1921  2. The Collapse of Communism  3. The New Economic Policy  4. Soviet Finance  5. The Economic Situation in Russia in the Years 1923-1925  6. The third International  7. Conclusions;  Bibliography;  Index