The Schema in Clinical Psychoanalysis 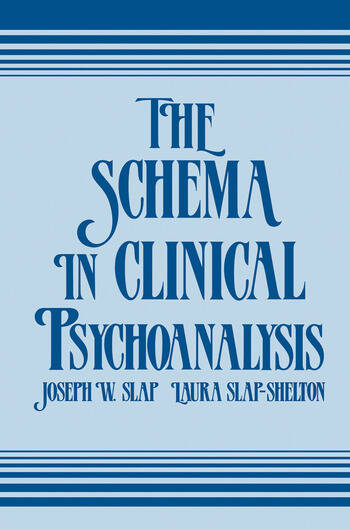 The Schema in Clinical Psychoanalysis

Slap and Slap-Shelton proffer the schema as the basis of an internally consistent and clinically relevant model of the mind. Wedded to the dynamic and genetic points of view, the schema model accommodates the clinical realities of trauma, repetition, and sublimation while dispensing entirely with the abstract concepts of traditional metapsychology.

"Over the years the problems inherent in the structural theory have become more and more obvious.  The time would now seem ripe for a new approach, one which not only is faithful to our work with the patient, but which provides a consistent and coherent theoretical background for that work.  In this book, Joseph Slap, here in collaboration with his daughter, Laura Slap-Shelton, has used his clinical skill and broad knowledge of psychoanalysis to present such an approach.  His model, based on the concept of the schema, is a major contribution and deserves careful study by anyone interested in psychological theory."

"Drawing on the work of George Klein, Piaget, and cognitive psychology, Joseph Slap and Laura Slap-Shelton offer the working clinician a fresh way of listening to associations and viewing data as film clips or freeze frames of organized or unitary mental experiences.  The structural and topographic models receive a thoughtful critical reevaluation and the useful idea of the "pathogenic schema" is clearly articulated.  The Schema in Clinical Psychoanalysis is recommended for practitioners of all analytic persuasions.  The clinical illustrations are concise and practical and illuminate superb work."

"In The Schema in Clinical Psychoanalysis, Slap and Slap-Shelton take dead aim at the experience-distant theorizing of the structural theory that dominated psychoanalytic thinking during the 1950s and 1960s.  Drawing on theories of George Klein, Piaget, and work Slap and I did together, the authors delineate a pathogenic, sequestered schema consisting of the residues of childhood traumas, fantasies that are reactive to these traumas, and associated defensive efforts.  The great strength of the schema model, as presented by the authors, is its direct applicability to a clinically relevant approach to many forms of psychopathology.  Slap and Slap-Shelton rest their case on excellent therapeutic examples."