The Science of Behavior and the Image of Man 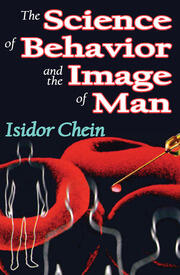 The Science of Behavior and the Image of Man

Does a proper respect for science require psychologists to view man as an impotent reactor whose responses are completely determined by his physical constitution and the forces impinging upon him? In this wise and well-argued book, Isidor Chein invites his readers to lift their eyes from experimental research for a time to consider the relationship between science and the image of man.

Few psychologists, even the most gifted and dedicated among them, pause to consider the philosophical underpinnings of their work. It is almost as though the humanist secretly lurking in each of them is fearful of the bad news he might finally be forced to accept--that man is essentially an exquisitely complicated robot. This fear is misplaced and harmful. It is largely responsible for the disturbing fact that scientific psychology has produced, in Chein's estimate, so little that is relevant to the humanities, so little, as he puts it, "that has lived up to psychology's promise to itself."

What must be more widely understood is that it does not follow that behavioral law is reducible to physiological law, or that physiological law is reducible to physical law. With an uncompromising commitment to scientific method, Chein shows that, when closely analyzed, there is actually no need to assume an unbridgeable gap between scientific psychology and psychoanalytic, humanistic psychology. This is a lucid and powerful theoretical work of importance for scholars in all fields sharing the belief that the proper study of mankind is man.

"The Science of Behavior and the Image of Man is written by the most intellectually stimulating and respected representative of scientific humanistic psychology."--Robert B. Holt, Professor of Psychology, Graduate School of Arts and Sciences, New York University