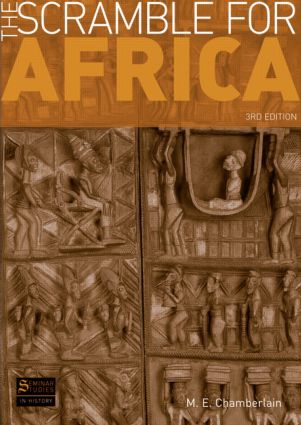 The Scramble for Africa

In 1870 barely one tenth of Africa was under European control. By 1914 only about one tenth – Abyssinia (Ethiopia) and Liberia – was not. This book offers a clear and concise account of the ‘scramble’ or ‘race’ for Africa, the period of around 20 years during which European powers carved up the continent with little or no consultation of its inhabitants.

In her classic overview, M.E. Chamberlain:

This indispensible introduction, now in a fully updated third edition, provides the most accessible survey of the ‘scramble for Africa’ currently available. The new edition includes primary source material unpublished elsewhere, new illustrations and additional pedagogical features. It is the perfect starting point for any study of this period in African history.

Part One: The problem

3. The Victorian image of Africa

8. Fashoda and the Anglo-French agreements of 1904

10 Death of Gordon At Khartoum

11 The desire to abandon responsibilities

12 The fears of British traders

17 The mixture of economic and strategic arguments

18 The ‘little Englanders’’ stand on Uganda

23 The Anglo-French agreements of April 1904

27. A modern rejection of traditional explanations of the partition

28. Was the whole phenomenon economic after all?