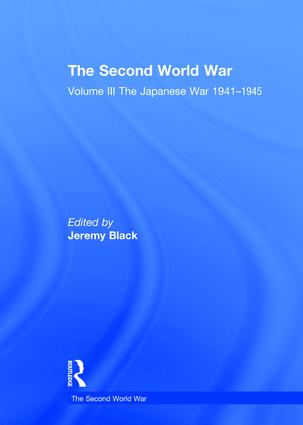 World War II defined the 20th century and shaped the contemporary world; from the decolonization of Africa to the rise and fall of the Berlin Wall. This comprehensive series, edited by one of the worlds leading military historians, offers a focused overview of this complex and volatile era, taking into account the political, economic and social factors, as well as military circumstances of the road to war and its consequences. Augmented by a full length and detailed introduction by the editor, each volume gathers together the seminal articles on specific arenas of the war, providing a convenient and essential resource for researchers and general readers alike.

'Jeremy Black has collected together a number of the best Anglo-American articles to appear in specialised journals over recent years on the Pacific War' Journal of Royal Asiatic Society 'Professor Black is to be congratulated on having assembled a notable series…In the course of this comprehensive collection of shrewdly selected articles, Professor Black has deftly highlighted much of what made the Second World War unique…There is much in the series to assist the undergraduate and the researcher in confirming a grasp both of historiography and of the cut and thrust of revisionist debate.' History

Jeremy Black is Professor in the Department of History, University of Exeter, UK.