The Secret Origins of Comics Studies 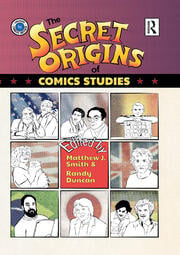 The Secret Origins of Comics Studies

In The Secret Origins of Comics Studies, today’s leading comics scholars turn back a page to reveal the founding figures dedicated to understanding comics art. Edited by comics scholars Matthew J. Smith and Randy Duncan, this collection provides an in-depth study of the individuals and institutions that have created and shaped the field of Comics Studies over the past 75 years. From Coulton Waugh to Wolfgang Fuchs, these influential historians, educators, and theorists produced the foundational work and built the institutions that inspired the recent surge in scholarly work in this dynamic, interdisciplinary field. Sometimes scorned, often underappreciated, these visionaries established a path followed by subsequent generations of scholars in literary studies, communication, art history, the social sciences, and more. Giving not only credit where credit is due, this volume both offers an authoritative account of the history of Comics Studies and also helps move the field forward by being a valuable resource for creating graduate student reading lists and the first stop for anyone writing a comics-related literature review.

Chapter 3 - The Historians of Creators by Brad Ricca

Chapter 5 - The Historians of the Art Form by Ian Horton

Chapter 6 - The Librarians and Archivists by Jenny Robb

Chapter 15 - Manga Studies, A History by Nicholas A. Theisen

Chapter 16 - The Organizations by Jeremy Larance

Chapter 17 - The Galleries by Kim Munson

Chapter 18 - The Conferences by Julia Round and Chris Murray

Matthew J. Smith is Professor and Director in the School of Communication at Radford University in Virginia. Along with Randy Duncan, he is co-editor of Routledge’s Advances in Comics Studies series. Previously, the two writing partners teamed with former DC Comics President and Publisher Paul Levitz to produce The Power of Comics: History, Form, and Culture (2nd Edition).

is Professor of Communication and Director of the Comics Studies Minor at Henderson State University. He is co-editor, with Matthew J. Smith, of the Eisner-nominated Critical Approaches to Comics: Theories and Methods. He is a co-founder, with Peter M. Coogan, of the Comics Arts Conference and received the Inkpot Award for contributions to Comics Studies.

"This landmark book makes a compelling and coherent narrative out of the complex and multi-threaded history - and pre-history - of comics studies. Its existence and publication is a powerful testament to just how far comics studies have now progressed." –Richard Reynolds, University of the Arts, London

"The emergence of comics studies as a full-blown academic discipline constitutes one of the most exciting and important developments in the contemporary humanities. This valuable book explores the circumstances that made our present moment possible while paying a generous and necessary tribute to many early pioneers of the field." –Ben Saunders, University of Oregon