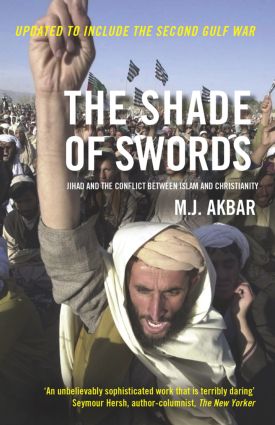 The Shade of Swords

Jihad and the Conflict between Islam and Christianity, 1st Edition

The Shade of Swords is the first cohesive history of Jihad, written by one of India's leading journalists and writers. In this paperback edition, updated to show how and why Saddam Hussein repositioned himself as a Jihadi against America, M.J. Akbar explains the struggle between Islam and Christianity. Placing recent events in a historical context, he tackles the tricky question of what now for Jihad following the collapse of Saddam Hussein's regime.

With British and American troops in Afghanistan, Pakistan, and once again in Iraq, the potential for Jihadi recruitment is ever increasing. Explaining how Jihad thrives on complex and shifting notions of persecution, victory and sacrifice, and illustrating how Muslims themselves have historically tried both to direct and control the phenomenon of Jihad, Akbar shows how Jihad pervades the mind and soul of Islam, revealing its strength and significance.

To know the future, one needs to understand the past. M.J. Akbar's The Shade of Swords holds the key.

'An excellent new book by the distinguished Indian journalist M.J. Akbar traces the centuries-long history of the conflict between Islam and Christianity, inflamed today by the world dominance of the US.' - The Guardian

'Wide-ranging and very readable account of the varied interpretations of the concept through history.' - The Statesman

'A whirlwind tour of Islamic history … reminds us that although Islamism per se, and with it jihad, periodically falls into abeyance, it never vanishes for good.' - Sunday Times

'Akbar makes some telling points … [a]nd it's hard to argue with his conclusion: "Defeat is only a setback in the holy war. The jihad goes on."' - Washington Post

M J Akbar is an Indian Muslim and journalist, best-selling author, the founder and editor-in-chief of the Asian Age newspaper and former government advisor and official spokesman to Rajiv Ghandi. He is a respected expert on Indian and Middle Eastern politics.