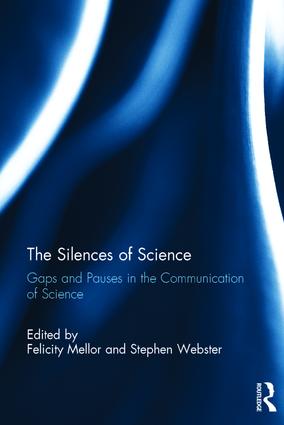 The Silences of Science

Gaps and Pauses in the Communication of Science, 1st Edition

Over the last half century scholars from a range of disciplines have attempted to theorise silence. Naively we tend to think of silence negatively, as a lack, an emptiness. Yet silence studies shows that silence is more than mere absence. All speech incorporates silence, not only in the gaps between words or the pauses that facilitate turn taking, but in the omissions that result from the necessary selectivity of communicative acts. Thus silence is significant in and of itself; it is a sign that has socially-constructed (albeit context -dependent and ambiguous) meanings.

To date, studies of science communication have focussed on what is said rather than what is not said. They have highlighted the content of communication rather than its form, and have largely ignored the gaps, pauses and lacunae that are an essential, and meaningful, part of any communicative act. Both the sociology of science and the history of science have also failed to highlight the varied functions of silence in the practice of science, despite interests in tacit knowledge and cultures of secrecy. Through a range of case studies from historical and contemporary situations, this volume draws attention to the significance of silence, its different qualities and uses, and the nature, function and meaning of silence for science and technology studies.

Introduction: The Communicative Functions of Silence in Science

1. 'He Didn't Go Round the Conference Circuit Talking About It': Oral Histories of Joseph Farman and the Ozone Hole (Paul Merchant)

3. 'Tired with this Subject…': Issac Newton on Publishing and the Ideal Natural Philosopher (Cornelis J. Schilt)

9. The (non)-conveying of the Experiential in Scientific Accounts of Buddhist Meditation (Brian Rappert, Catelijne Coopmans and Giovanna Colombetti)

Part 3: Silences in the Public Sphere

11. Having It All: Ownership in Open Science (Ann Grand)

12. Shocking Silences: The Management and Distribution of Silences Around TASER™ (Abi Dymond)

13. 'An Outcry of Silences': Charles Hoy Fort and the Uncanny Voices of Science (Charlotte Sleigh)

Felicity Mellor is Senior Lecturer in Science Communication at Imperial College London, UK. Her research examines the representation of science in the media and the ideological dimensions of scientists’ public discourse. She is editor, along with Alice Bell and Sarah Davies, of Science and its Publics (Cambridge Scholars Publishing, 2009).