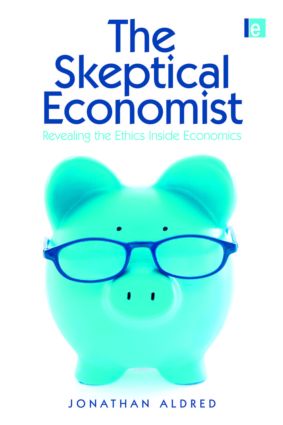 Economics is unavoidably central to any attempt to improve our quality of life, but most people do not know why, or how to question its underlying assumptions. The Skeptical Economist rejects the story told by other popular economics books. Responding to Western malaise about quality of life, and a growing curiosity about economics and its relevance to these concerns, Jonathan Aldred argues that economics is not an agreed body of knowledge or an objective science. In reality economics is built on ethical foundations - distinctive and controversial views about how we ought to live, what we value and why. This revealing and entertaining book exposes these hidden assumptions, and opens up the black box of modern economics to reveal that conventional wisdom is not what it appears to be. The Skeptical Economist will challenge us all to examine the assumptions behind the economics of our current way of life. It rediscovers the ethics at the heart of economics.

'Aldred has written a well-organized and easily accessible text with an admirable capacity to build arguments across the various chapters. It continuously stimulates reflection. It is moreover an important text about some very important issues. I learned a lot, and I am sure the readers of Ecological Economics will too.' Arild Vatn, Department of International Environment and Development Studies, Norwegian University of Life Sciences.

'An astonishingly good book. It takes the mainstream economic views on which the likes of Freakonomics are based and makes a very convincing case for why they may be wrong.' Ethical Corporation.

'Every generation of economists has a thoughtful critic who is too good to be dismissed. Aldred has the understanding and acumen to play that role for the current generation … Essential.' Choice Magazine.

'The Skeptical Economist responds to the malaise about quality of life, and a growing curiosity about economics and its relevance to life … an astonishingly good book.' Dr Sudhirendar Sharma, Live Mint.

'This book goes much further than the various books that have paved the way for popular economics. Freakonomics and related titles are really just conservative economics dressed up to look sexy. I suspect most readers find that, while entertaining, they don't give them the sceptical view of economics that they were looking for. Jonathan Aldred gives both - scepticism and entertainment.' Clive Hamilton, Professor of Public Ethics and author of Growth Fetish.

'Essential reading for anyone who uses economic thinking in the real world. In refreshingly plain English, Jonathan Aldred reveals the limitations and hidden assumptions of traditional economics and the damage which they do if mindlessly applied in practice…There is no mathematics or jargon to confuse the layman: just the challenge of clear thinking.' Richard Wilson, Lord Wilson of Dinton, Former Cabinet Secretary to the UK Government.

'The Skeptical Economist addresses questions of real public importance. Its combination of academic rigour and a clear and jargon free style will make it accessible to a broad general audience. It deserves to be read widely.' Professor John O'Neill, University of Manchester.

'Aldred carefully works through all the arguments needed to help non-economists from other disciplines to critique economics accurately. This book will be useful to policy-makers who must defend public policies from economists' ideologies and faulty assumptions, as well as for serious students of Economics 101 in their efforts to teach their professors what's wrong with this discipline.' Hazel Henderson, author, Ethical Markets: Growing the Green Economy.

'The Skeptical Economist is an astonishingly good book. It takes the mainstream economic views on which the likes of Freakonomics are based and makes a very convincing case for why they may be wrong … The author's conclusions … are important ones, especially given the support he provides for them in the book. They should be studied by anyone with an interest in the way a possibly flawed discipline is shaping modern societies, particularly with regards to public services.' Ethical Corporation.

'Presents to the general reader in a manner free of mathematics and jargon.' 'Imagine if every rainmaker, rocket scientist and trader on Wall Street had been privy to the nuggets of wisdom found here. Chances are that the implosion of the financial markets would have been minimal.' Vuyo Njokweni, New Agenda, 2010.

'Presents an alternative view of modern economics based on ethical foundations'. Journal of Economic Literature.

Dr Jonathan Aldred is a Fellow and Director of Studies in Economics at Emmanuel College and a Newton Trust Lecturer in the Department of Land Economy, both in the University of Cambridge, UK. An economist by training, his research interests are now interdisciplinary, spanning economics, philosophy, law and political theory.