The Sky is Not the Limit
Breakthrough Leadership

The Sky is Not the Limit: Breakthrough Leadership

What exactly is "breakthrough leadership"? Quite simply, it's an approach to performance aimed at transcending limitations and maximizing team potential. As the author points out, the process of innovation and high performance is not random or haphazard. The limitations and barriers that commonly get in the way of success can be overcome-if we use the right leadership techniques.
And that's just what Dr. Bart Barthelemy, one of the nation's leaders in the fields of aeronautics and astronautics, discusses in The Sky Is Not the Limit-leadership techniques that work, and work consistently. Barthelemy has used his years of management experience to come up with a practical, results-driven guide to leadership based on the ideas of competitive collaboration and structured flexibility.
Whether you're a manager, supervisor, team leader or consultant, The Sky Is Not the Limit can help you achieve significant breakthroughs in performance and productivity. You can use its proven tips and techniques to lead your teams to new heights of excellence. Remember, the sky is not the limit-not for airplanes, not for this planet, not for our organizations and not for any of us!

Dr. Bart Barthelemy is currently the Director of Training and Education for Universal Technology Corporation in Dayton, Ohio, where he is responsible for the development of corporate training and education programs and services. He is also a founding member ofT aos Laboratories of Santa Fe, New Mexico, where he serves as the Director of the Leadership Laboratory and as the co-leader of the FutureSpace Project. Dr. Barthelemy is also a partner in the Best Yet Company of London, England, and Aspen, Colorado, as well as Innovation Development Assodates, based in Dayton, Ohio, and Palm Beach, Florida. For the past fifteen years, he has worked with senior leaders from IBM, ALCOA, General Motors, Westin Hotels, NCR Corporation, AT&T, Westinghouse, Rockwell, United Technologies, American Greeting Cards, General Foods, MIT, Carnegie-Mellon, UCLA, and the U.S. Air Force. Dr. Barthelemy served as the Director of the Air Force's Training Systems Product Group, the Director of the National Aero- Space Plane Program, and the Technical Director of the Air Force's Wright Laboratories. In these positions, he was responsible for over ten billion dollars of R&D in the leading-edge fields of virtual reality, modeling and simulation, hypersonic aerodynamics, advanced propulsion, and systems engineering. During his senior executive experience, he led government teams of several thousand people and directed even larger industrial teams. Dr. Barthelemy has bachelor's and master's degrees in engineering from MIT and a Ph.D. in nuclear physics from Ohio State University. He has published over 250 papers and conducted over 1,000 workshops. He is the redpient of the National Space Trophy, the Golden Knight Award, and the President's Distinguished Rank Award. He has published two books, High Performance and The Sky Is Not the Limit, both on breakthrough leadership. For additional information, please contact Dr. Barthelemy at Universal Technology Corporation, 513-426-8530; Taos Laboratories, 800-982-6799; or Innovation Development Assodates, 513- 253-6778. 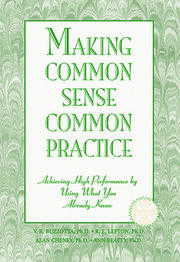