The Social History of Post-Communist Russia 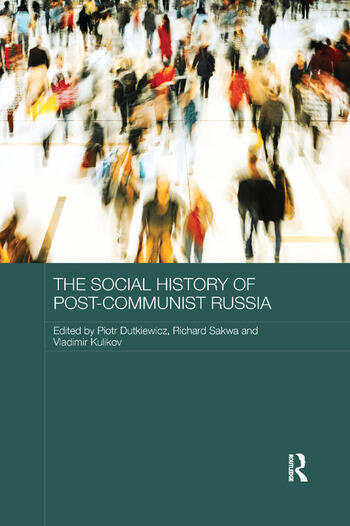 The Social History of Post-Communist Russia

This book tells the untold story of how ordinary Russian people experienced and coped with Russia’s transformations after the end of communism. Unlike most studies of the subject which focus on high politics, developments in the elite and events at the centre, this book, which includes findings from interviews, memoirs, public opinion surveys and press articles and documents from the regions, portrays a multi-ethnic, multi-confessional society with different groups affected by the deep and varied changes in diverse and different ways. The book covers economic developments, social changes, how official policies played out at the grass-roots level, the psychological impact of the changes and the impact on public opinion, and how different regions were affected differently. Overall, the book reveals the hidden dynamics of Russian society, including its formal and informal mechanisms and rules for relating to the state and other citizens, and shows how millions of Russians coped, despite all the odds, and maintained the integrity and stability of the country.

1.Introduction: actors, attitudes and practices in the evolution of Russian society since 1991 Piotr Dutkiewicz 2. A people in the absence of the people, or a view of postcommunism from below Boris Kapustin 3. Economic and social development of post-communist Russia, 1991-2014 Vladimir Popov & Piotr Dutkiewicz 4. Transformation for the people or for the elite? Leonid Grigoryev 5. The puzzle of public opinion: popular support for the transition to capitalism Vladimir Popov 6. The reforms of the 1990s in the eyes of Russian society Mikhail K. Gorshkov 7. Changes in Russian social structure in the postcommunist period Natalia Tikhonova 8. New Russia: the evolution of Russian public opinion in 1989-2014 Valery V. Fyodorov 9. The psychological transformation of society in post-Soviet Russia Elena Shestopal 10. The evolution of ethnic and religious relations in Russia since the 1980s Galina Gribanova 11. Society and elites in Russian regions: post-Soviet changesNatalia Zubarevich Natalia Zubarevich 12. Social investment: experience and lessons of the last twenty years Andrei Margolin 13. Russian elites: a strategy of ‘self –isolation’ Boris Mezhuev 14. Conclusion: bringing the people back in Richard Sakwa 15. Afterword to the Russian edition Vladimir Yakunin

Piotr Dutkiewicz is Professor of Political Science and Director of the Centre for Governance and Public Policy at Carleton University in Ottawa, Canada.

Richard Sakwa is Professor of Russian and European Politics at the University of Kent, UK.