The Social Unconscious in Persons, Groups, and Societies
Volume 3: The Foundation Matrix Extended and Re-configured 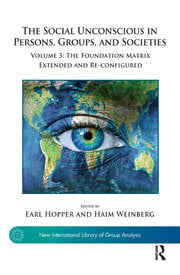 The Social Unconscious in Persons, Groups, and Societies: Volume 3: The Foundation Matrix Extended and Re-configured

In this book, the authors develop the theory of the tripartite matrix, consider music as a form of non-verbal communication as a sub-dimension of the matrix, and present empirical studies of the matrices of peoples in three societies in the Middle East. It aids in the project of group analysis.

Introduction -- Theory -- The concepts of the social unconscious and of the matrix in the work of S. H. Foulkes -- The fluid and the solid—or the dynamic and the static: some further thoughts about the conceptualisation of foundation matrices, processes of the social unconscious, and/or large group identities -- The national habitus: steps towards reintegrating sociology and group analysis -- The inner organisation of the matrix -- Non-Verbal Communication -- The unbearable appeal of totalitarianism and the collective self: an inquiry into the social nature of non-verbal communication -- The musical foundation matrix: communicative musicality as a mechanism for the transmission and elaboration of co-created unconscious social processes -- Empirical Studies of the Social Unconscious and the Dynamic and Foundation Matrices of Middle Eastern Peoples and Societies -- The social unconscious of Israeli Jews: described and analysed by an Israeli living in North America -- “Black holes” as a collective defence against shared fears of annihilation in a small therapy group and in its contextual society -- The social unconscious of the Palestinian people -- “After the last sky”:* Palestine, Palestinians, social memory -- The social unconscious of the Egyptian people: an application of some of the ideas of Bion and Klein -- Fundamental terror of ISIS: the story of a reversed family -- Epilogue