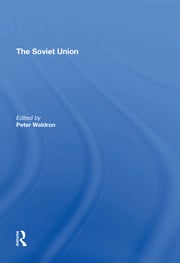 The Soviet Union was one of the most significant historical phenomena of the twentieth century. This volume brings together key articles that analyse its birth in the 1917 revolution, the development of Stalin's tyranny and Soviet decline from the 1960s onwards. The collection includes scholarship of the highest quality that illuminates this key episode in the history of both Europe and the wider world.

Contents: Series preface; Introduction. Part I The Bolshevik Seizure and Consolidation of Power: Lenin's conception of revolution as civil war, Israel Getzler; The Red Army and mass mobilisation during the Russian civil war, 1918-1920, Orlando Figes; Bolshevik razverstka and war communism, Lars T. Lih; The Bolsheviks and the peasantry: the land question during the first 8 months of Soviet rule, John Channon; Urbanisation and deurbanisation in the Russian revolution and civil war, Diane Koenker. Part II Stalin and Stalinism: New perspectives on Stalinism, Sheila Fitzpatrick; Victims of the Soviet penal system in the prewar years: a first approach on the basis of archival evidence, J.Arch Getty, Gábor Ritterspoorn and Victor N. Zemskov; 'Bab'i bunty' and peasant women's protest during collectivisation, Lynne Viola; How the mice buried the cat: scenes from the great purges of 1937 in the Russian provinces, Sheila Fitzpatrick; 'Us against them':Social identity in Soviet Russia, 1934-41, Sarah Davies. Part III War and Post-War Recovery: The Soviet response to surprise attack: 3 directives, 22 June 1941, J. Erikson; Stalin's cabinet: the Politburo and decision making in the post-war years, Yoram Gorlizki; The Leningrad affair and the provincialisation of Leningrad, Blair A. Ruble; The standard of living of Soviet industrial workers in the immediate post-war period, 1945-48, Donald Filzer. Part IV Stagnation: Khrushchev and Brezhnev: Khrushchev's image in the light of glasnost and perestroika, David Nordlander; The fall of Nikita Khrushchev, William J. Tompson; Patronage networks and coalition building in the Brezhnev era, John P. Willerton Jr. Part V Gorbachev and the Collapse of the Soviet Union: Brezhnev's 'social contract' and Gorbachev's reforms, Linda J. Cook; Perestroika as revolution from within: an interpretation, John Gooding; The making of elections to the Congress of People's Deputies (CPD) in March 1989, Vladimir N. Brovkin; A Socialist pluralism of opi