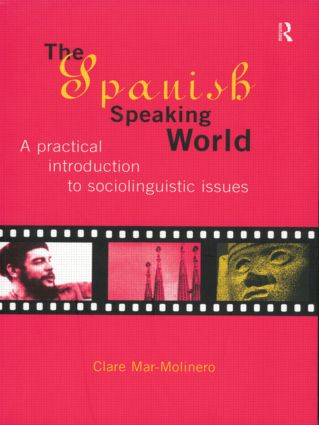 This accessible textbook offers students the opportunity to explore for themselves a wide range of sociolinguistic issues relating to the Spanish language and its role in societies around the world. It is written for undergraduate students who have a sound practical knowledge of Spanish but who have little or no knowledge of linguistics or sociolinguistics. It combines text with practical exercises and discussion questions to stimulate readers to think for themselves and to tackle specific problems.

In Part One Clare Mar-Molinero discusses the position of Spanish as a world language, giving an historical account of its development and dominance. Part Two examines social and regional variation in Spanish, and investigates dialects, language attitudes, and style and register, particulaly in the media. The author also questions the relationship between gender and language. Part Three focuses on current issues, particularly those arising from language policies and legislation, especially in the education system, in Spain, Latin America and the USA.

'This book is essential reading for any student undertaking an undergraduate course in Spanish and for anyone wishing to understand more fully the sociolinguistic issues of the Spanish-speaking world.' - Vida Hispanica

'An informative and intelligible account of the sociolinguistic factors which have contributed to the present position of Spanish and its neighbouring languages, and prompts the reader to play an active role in recognizing the relevance of sociolinguistic theories to current usage and attitudes … the scope of the book is considerable.' - TESSARAE

'comments on alnguage attitudesand the politics of language in spain and several parts of latin America are sensitive and perceptive….this book is competent and well-informed. It is targetted precisely at a linguistically unsophisticated but politically aware audience,' - Bulletin of Hispanic Studies 98

Acknowledgements. Introduction Part One: The Position of Spanish in the World 1. The origins of Spanish: the historical context of a dominant language 2. Spanish in Latin-America 3. The other languages of Spain Part Two: Exploring Linguistic Variation 4. Regional and social variations in Spanish 5. Language attitudes 6. Register in Spanish 7. Getting the message across: Spanish in the media 8. Language and gender Part Three: Current Issues: Language as National Identity Marker 9. Language policies in post-Franco Spain 10. Language planning 11. Language and education 12. The vitality of Spanish today Further reading. Index of terms. Bibliography.