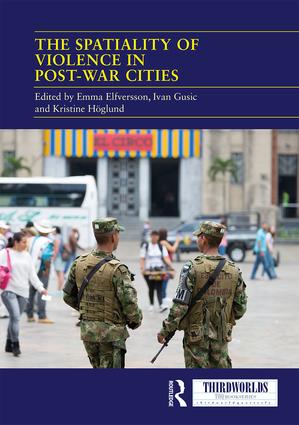 The Spatiality of Violence in Post-war Cities

The Spatiality of Violence in Post-war Cities analyses violence in post-war cities from different perspectives and in different parts of the world, with a shared attention to space and how it affects violent dynamics.

The world is urbanising rapidly and cities are increasingly held as the most important arenas for sustainable development. Cities emerging from war are no exception, but across the globe, many post-war cities are ravaged by residual or renewed violence, which threatens progress towards peace and stability. This volume addresses why such violence happens, where and how it manifests, and how it can be prevented. It includes contributions that are informed by both post-war logics and urban particularities, that take intra-city dynamics into account, and that adopt a spatial analysis of the city. They focus on cases around the world, including Medellín (Colombia), Johannesburg (South Africa) and Mitrovica (Kosovo). The volume makes a threefold contribution to the research agenda on violence in post-war cities. First, the contributions nuance our understanding of the causes and forms of the uneven spatial distribution of violence, insecurities, and trauma within and across post-war cities. Second, the collection demonstrates how urban planning and the built environment shape and generate different forms of violence in post-war cities. Third, the contributions explore the challenges, opportunities, and potential unintended consequences of conflict resolution in violent urban settings.

Providing novel insights into the causes and dynamics of violence in post-war cities, and challenges and opportunities for violence reduction The Spatiality of Violence in Post-war Cities will be of great interest to scholars of peace studies, violence, conflict studies and resolution, urban studies, built environment and planning. The chapters were originally published as a special issue of Third World Thematics.

1. Introduction: The spatiality of violence in post-war cities

6. The role of power for non-state armed groups in cities: marginalised spaces and transitions from armed conflict

7. Inclusive peace mediation in the city: spatial segregation of violence and urban politics of ‘social’ inclusion in gang truces

9. Grasping the empirical realities of peace in post-war northern Mitrovica

Emma Elfversson is postdoctoral researcher at the Department of Peace and Conflict Research, Uppsala University. Her research interests concern rural/urban dimensions of organised violence, ethnic politics and communal conflict, and the role of state and non-state actors in addressing conflicts.

Ivan Gusic is postdoctoral researcher at the Department of Political Science, Lund University. His research interests include war-to-peace transitions in post-war cities; urban conflict and violence; and the spatiality of war and peace.

Kristine Höglund is Professor of Peace and Conflict Research at Uppsala University. She works on the causes and consequences of electoral violence; urban conflict, violence and conflict resolution; and the dynamics of peace processes, peacebuilding and transitional justice.

THIRDWORLDS will focus on the political economy, development and cultures of those parts of the world that have experienced the most political, social, and economic upheaval, and which have faced the greatest challenges of the postcolonial world under globalisation: poverty, displacement and diaspora, environmental degradation, human and civil rights abuses, war, hunger, and disease.

THIRDWORLDS serves as a signifier of oppositional emerging economies and cultures ranging from Africa, Asia, Latin America, Middle East, and even those ‘Souths’ within a larger perceived North, such as the U.S. South and Mediterranean Europe. The study of these otherwise disparate and discontinuous areas, known collectively as the Global South, demonstrates that as globalisation pervades the planet, the south, as a synonym for subalterity, also transcends geographical and ideological frontiers.