The Spectacle of Isolation in Horror Films
Dark Parades 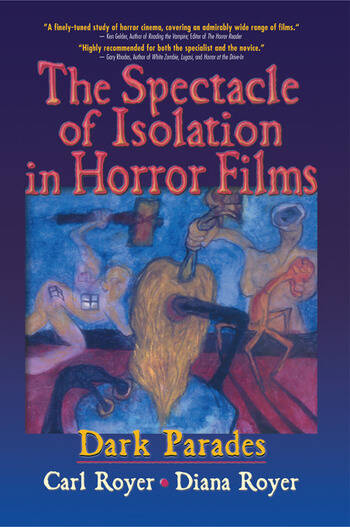 The Spectacle of Isolation in Horror Films: Dark Parades

The Spectacle of Isolation in Horror Films: Dark Parades examines the work of several of the genre’s most influential directors and investigates how traditional themes of isolation, alienation, death, and transformation have helped build the foundation of horror cinema. Authors Carl and Diana Royer examine the techniques used by Alfred Hitchcock that place his work squarely in the horror (rather than suspense) genre, discuss avant-garde cinema’s contributions to mainstream horror, explore films that use the apartment setting as the “cell of horror,” and analyze how angels and aliens function as the supernatural “Other.” A unique resource for film students and film buffs alike, the book also examines Sam Raimi’s Evil Dead trilogy and the fusion of science, technology, and quasi-religious themes in David Cronenberg’s films.

Instead of presenting a general overview of the horror genre or an analysis of a specific sub-genre, actor, or director, The Spectacle of Isolation in Horror Films offers an imaginative look at classic and contemporary horror cinema. The book examines Surrealist films such as Un Chien Andalou and Freaks, the connections among the concepts of voyeurism, paranoia, and alienation in films like Rear Window, Rosemary’s Baby, Blue Velvet, and The Blair Witch Project; the use of otherworldly creatures in films such as The Prophecy, Dogma, and The Day The Earth Stood Still; and the films of directors George Romero, John Waters, and Darren Aronofsky, to name just a few. This unique book also includes an extensive A-to-Z filmography and a bibliography of writings on, and about, horror cinema from filmmakers, film critics, and film historians.

The Spectacle of Isolation in Horror Films examines:

The Spectacle of Isolation in Horror Films: Dark Parades is a unique resource of critical analysis for academics working in film and popular culture, film historians, and anyone interested in horror cinema.