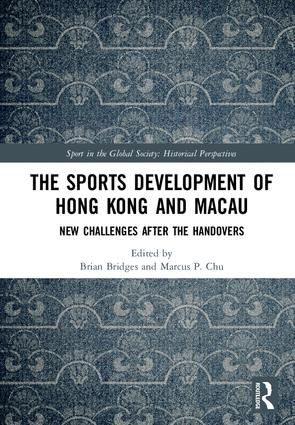 The Sports Development of Hong Kong and Macau

China’s sports history and its contemporary role in the global sporting community have become well-known, but the sporting history and development of China’s two Special Administrative Regions – Hong Kong and Macau – have not received the coverage they deserve either in their historical contexts or since the handovers of control to the People's Republic. By drawing on a multi-national group of scholars and practitioners, this volume makes a unique contribution to the understanding of sports development in greater China. The essays in this anthology examine the evolution of key sports, the hosting of sporting mega-events, the nexus of sports and politics, identity issues, and the role of sporting diplomacy. The chapters provide not only an analysis of colonial legacies but also in-depth accounts of the challenges to and outcomes of sports development in Hong Kong after 1997 and Macau after 1999.

The chapters in this book were originally published in various special issues of The International Journal of the History of Sport.

2. The Hong Kong Games in the Eyes of Local Sports and Recreation Students

4. Emergence, Cessation and Resurgence during the Evolution of Rugby Union in Hong Kong

5. ‘Indigenous’ or ‘All Stars’: Discourses on ‘Team Hong Kong’ in a FIFA World Cup Tournament

7. From Integration with China to Engagement with the World: International Mega-sports Events in Post-Handover Macau

Brian Bridges is an adjunct professor in the Department of Political Science at Lingnan University, Hong Kong. Formerly Head of that Department (2007–10), he specialises in the international politics and modern history of the Asian Pacific region, with a particular focus on the sport–politics nexus. His most recent book is The Two Koreas and the Politics of Global Sport (2012).

is an assistant professor in the Department of Political Science at Lingnan University, Hong Kong, where he has been teaching since 2012. He has published extensively on the politics of sport in China and is working on a book project exploring the history and politics of sporting mega-events in the greater China region.