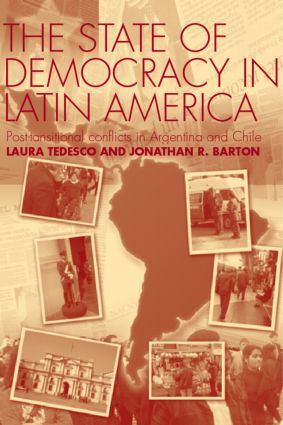 The State of Democracy in Latin America

In a shift away from the more typical analyses of Latin American political change during the 1990s, this book presents a more state-centric perspective that seeks to explain why transitions to democracy and trends towards better governance have failed to provide more political and social stability in the continent. Through a deeper analysis of underlying social relations and values and how these manifest themselves through institutions, the state is understood not purely as an institutional form but rather as a set of interdependent relations that are shaped by particular collective and individual interests.

'The State of Democracy in Latin America is an ambitious work that should be widely discussed for the implications of its central arguements concerning the contradiction between the egalitarian promise of democracy and the neoliberal state.'

'I for one, am thankful for a book that forcefully places a socio-economic egalitarianism at the centre of debates over democracy with rich implications for theories of the state.' -Eduardo Silva, University of Missouri- St Louis

Laura Tedesco is a political scientist who specialises in state reform, democratisation, the political class, and the economics and politics of contemporary Latin America. Her previous publications include Democracy in Argentina. Hope and Disillusion (London: Frank Cass, 1999) and several articles on contemporary politics in Latin America. She teaches politics at the School of Development Studies, University of East Anglia. Jonathan R. Barton is a Lecturer in the School of Development Studies, University of East Anglia, UK. He works on both issues of Latin American political economy as well as environmental politics and policy. He has written the book A Political Geography of Latin America (Routledge, 1997) as well as articles and book chapters on the Chilean transition.