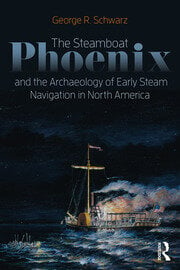 The Steamboat Phoenix and the Archaeology of Early Steam Navigation in North America offers an in-depth exploration of the archaeological and cultural aspects of early American steamboat development. It also tells the story of Phoenix, the second steamer to operate on Lake Champlain and the world’s earliest archaeologically studied steamboat wreck. In doing so, this book provides a unique insight into early perceptions of steam navigation, including both the wonder and fear elicited by the comfort and efficiency they promised and the hazards with which they came to be associated.

The advent of steam navigation contributed significantly to the economic transformation of early America, facilitating trade through the transportation of goods along the country’s lakes, rivers, and canals. Despite their significant role, however, few details on the construction and operation of early steamboats have survived in historical documents. This book helps address this gap by examining the archaeological record.

Using Phoenix as a case study and comparing it with the archaeological remains of other contemporary steamers, this book offers a detailed and extensive insight into the development of early steam propulsion and of steamboat culture in America, as well as a look at what life was like on board through the analysis of recovered artifacts and contemporary accounts. With over 90 illustrations, including a reconstruction of the steamboat, The Steamboat Phoenix and the Archaeology of Early Steam Navigation in North America is ideal for archaeologists and maritime historians, but also for those with a general interest in American maritime history.

Chapter 7: From the Ashes (a Reconstruction)

Chapter 8: Phoenix and the Design Characteristics of early 19th-Century Paddlewheelers

Chapter 9: Steamboat Living on American Waterways in the First Quarter of the 19th Century

George R. Schwarz is an underwater archaeologist for the Naval History and Heritage Command, and part of a team that manages, preserves, and studies U.S. Navy’s sunken military craft. In addition to naval and steamboat wrecks, he is involved in research on post-medieval Iberian vessels. He holds a PhD in Anthropology from Texas A&M University’s Nautical Archaeology Program.

"The work is well referenced, using standard in text referencing format, and then citing the references used at the end of each chapter, to me a useful and more immediate touch for the researcher. Finally, though I did not like them at all, the cartoon-like images at Figures 4.6 and 4.8 purporting to present the contemporary scene as Phoenix is consumed by fire, and 4.9, the ‘Witch of [Lake] Champlain’ actually succeed if one keeps the other half of Schwarz’s audience (the general reader, seeking a good, easily-read and lively maritime story) in mind. For them Schwarz’s Phoenix can be a great introduction to the region’s maritime history and to maritime archaeology and its many facets, again widening its appeal. Schools in the region might also find it a useful work for the same reason."