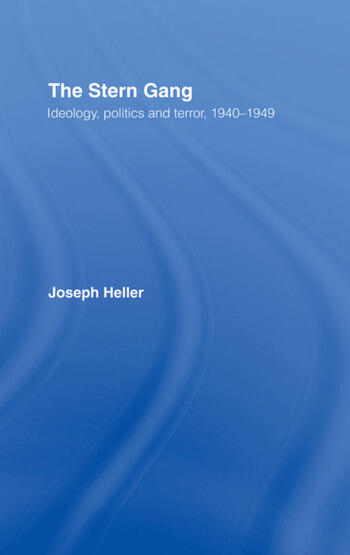 This study of "The Stern Gang" attempts to demythologize the image of this extremist, Zionist underground group. The book analyzes the party's split from the Irgun Zvai Leumi (National Military Organization) and its attempts to synthesize the politics and ideals of the right and left.

"Joseph Heller has written an original if esoteric study of the complex - at times bzarre - ideologies flirted with by Ster/Lehi. His diligent, meticulous research in to the group"s multifarious publications affords the general reader an unprecedented glimpse into the Lehi"s private world, generally quite divorced from the real one around it ... Yet, even if history does not repeat itself, this volume contains many lessons that need to be learned by some."

"One must admire Heller"s ability to gain access to so much documentary archival material, to extract useful reminiscences from interviews with cooperative former activists, and to assemble his evidence with a critical eye. The result is an erudite text."

"A superb treatment of the subject matter ... Heller"s research efforts are impeccable."

"The overall sweep of its masterful analysis and exposition could well make it the definitive presentation of this fiercely intriguing chapter of Israel"s pre-natal period."

"The distinguishing merit of Heller"s book, which produced scandalized responses when it was first published in Hebrew, is his delineation of the theoretical basis of the Sternist movement ... Heller"s is the first study to place Stern and his little movement within a comprehensible ideological and diplomatic context."

"This is an important book ... Thanks to Heller, many readers will benefit from a better understanding of the dilemma faced by the Zionist movement at the end of the 1930s."

"Heller has written a useful and engaging study ... Carefully documented and well argued, this work fills an important niche in Zionist history.