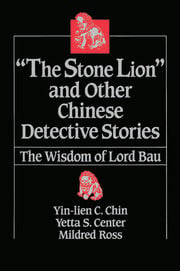 The Stone Lion and Other Chinese Detective Stories: Wisdom of Lord Bau

Presents ten tales featuring Lord Bau, a wise judge who was a champion of righteousness and protector of the weak against the powerful.

As America begins the twenty-first century there is a growing outcry across the land for reform of the nation's chaotic immigration policies - especially in the light of new national security concerns. In this completely revised and updated version of his classic text on the subject, Vernon M. Briggs spells out how the nation's immigration policies consist of a hodge-podge of ineffective, counter productive, and special interest provisions, born from more than forty years of dubious political compromises, rather than serving the national interest. Using fresh data from the 2000 Census, Briggs shows how immigration patterns are in direct conflict with emerging labor market trends and constitute a serious threat to the jobs of American workers. He also provides specific details on what needs to be done to reform immigration policies so that they once more serve the national interest and promote national security.