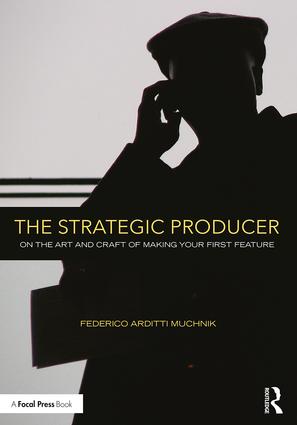 On the Art and Craft of Making Your First Feature, 1st Edition

Today’s technologies and economic models won’t settle for a conventional approach to filmmaking. The Strategic Producer: On the Art and Craft of Making Your First Feature combines history, technology, aesthetics, data, decision-making strategies, and time-tested methods into a powerful new approach to producing. An ideal text for aspiring filmmakers, The Strategic Producer orients the reader’s mind-set towards self-empowerment by sharing essential and timeless techniques producers need to get the job done while also embracing the constantly evolving production landscape.

"Federico Arditti Muchnik mines 25 years of teaching popular courses in producing films as well as actually having produced a series of fine, sensitive films. The result is a book that strikes the perfect balance between tried-and-true techniques and the very latest methods used by cutting-edge directors. The Strategic Producer should be on every independent producer’s bookshelf."

—Michael Donaldson, co-author of Clearance & Copyright: Everything the Independent Filmmaker Needs to Know

"Making a movie is like playing three-dimensional chess with live ammunition. The Strategic Producer gives you a bulletproof vest of information, tactics, and cunning to come out alive and well at the other end. An invaluable ally in negotiating the invisible minefields of independent filmmaking, Muchnik takes you where other books don’t—from idea, to proof of concept and the crucial, often unasked question, ‘is this sellable?’, to incredibly useful details for every conceivable step of actually getting the beast tamed. Wisely, The Strategic Producer teaches that, above all, a producer must exude calm."

4.1: Elements and Structure of the Script

PART 2 : GETTING TO WORK

6.6: No Budget Filmmaking and the Compilation Film

7.3: Shooting On A Soundstage

9.2: Test Screenings and Finishing the Film

Federico Muchnik has been making films for 30 years. He studied film at NYU’s Tisch School of the Arts and worked as a producer for PBS. He has also produced content for Disneyland, ABC Television, and HBO. He played the lead role in The Golden Boat, directed by Raul Ruiz, shown at Sundance, New York, and Toronto and distributed by Strand Releasing. He co-wrote and co-edited Secret Courage, a documentary about the Jewish resistance movement during World War 2. He has made many fiction-based long form series for the educational markets and filmed numerous projects throughout North America, Europe, and Latin America. He has taught filmmaking at Boston University, Emerson College, and in New York and Los Angeles. Most recently, he produced and directed the feature length This Killing Business distributed by Filmbox Arthouse in Europe and shown at numerous festivals in the U.S. More at his production company site www.mightyvisual.com and his film blog http://filmadvisor.blogspot.com.