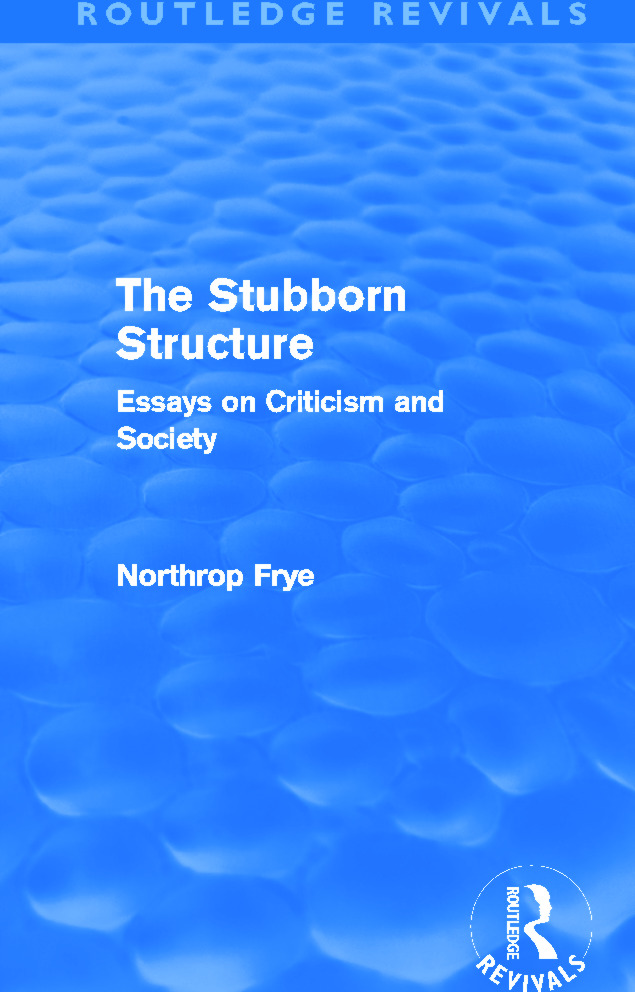 First published in 1970, this collection is made up of a selection of essays composed between 1962 and 1968, written by distinguished humanist and literary critic Northrop Frye. The book is divided into two parts: one deals largely with the contexts of literary criticism; the other offers more specific studies of literary works in roughly historical sequence. One of the essays is Frye’s own elucidation of the development of his critical premises out of his early concern with the poetry of William Blake. Taken together, the essays offer a continuous and coherent argument, making a whole that is entirely equal to the sum of its parts.

'Frye in these essays is at the top of his form; they are urbane, witty, erudite, sometimes outrageous, and usually stimulate the reader most when he most disagrees with the writer's claims.' - M. H. Abrams, Cornell University

‘Frye’s Literary essays, ranging from Milton to Yeats, are informed and subtle, and his social essays are clearly humane and concerned. He is one of four or five people, in contemporary cultural studies, who need to be faced, because of the solidity and influence of their work.’ – Raymond Williams, Guardian

‘Those who are willing to concede the absurdity of approaching literature without any idea of the rules of literary activity ought to take to heart Frank Kermode’s warning that Frye "cannot be safely ignored".’ – Stephen Vizinczey, The Times

‘Everywhere there is plentiful evidence of deep thinking and close reading. He expounds, and practices, healthy doctrine: that the whole art and end of criticism is to keep your eye on the ball’ – David Williams, Daily Telegraph

‘His great quality is the sensitivity with which he surveys the whole landscape of a writer’s work.’ – Denis Donoghue, Listener

Part 1: Contexts 1. The Instruments of Mental Production 2. The Knowledge of Good and Evil 3. Speculation and Concern 4. Design as a Creative Principle in the Arts 5. On Value-Judgements 6. Criticism: Visible and Invisible 7. Elementary Teaching and Elemental Scholarship Part 2: Applications 8. Varieties of Literary Utopias 9. The Revelation to Eve 10. The Road to Excess 11. The Keys to the Gates 12. The Drunken Boat: The Revolutionary Element in Romanticism 13. Dickens and the Comedy of Humours 14. The Problem of Spiritual Authority in the Nineteenth Century 15. The Top of the Tower: A Study of the Imagery of Yeats 16. Conclusion to A Literary History of Canada