The Survival Regime
Global War and the Political 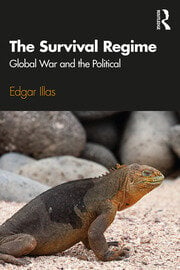 The Survival Regime: Global War and the Political

The Survival Regime explores the concept of survival to describe the effects on politics of the fusion of war and capital in globalization. Survival defines a sort of degree zero governmentality that has resulted from the crumbling of the political and spatial architecture of modernity, particularly the state. It does not simply name the new content of all politics or the economic law of the strongest of neoliberalism. Rather, it theorizes how systemic violence and permanent instability force political life to struggle for its own existence, thus generating a regime based on productive engagement and urgent intervention.

Through a critical dialogue with various contemporary thinkers (Galli, Hardt and Negri, Esposito, Agamben, Derrida, and Schmitt, among others), Edgar Illas theorizes survival as a global logic that overcomes the links between life and power explained by the Foucauldian paradigm of biopolitics. He examines parallel notions such as singularity, aleatoriness, eclecticism, and distinction to question previous theorizations of the political based on class struggle, inclusion, hegemony, or recognition of demands.

Through the intersection of different lines of inquiry, including Marxism, war theory, biopolitics, and deconstruction, The Survival Regime contributes to the rethinking of critical theory, political theory, and cultural studies in globalization.

1. The Conceptual Fog of Global War

2. The Regime of Survival

4. A World of Singularities

Conclusion: What Is It To Survive?

Edgar Illas is an associate professor of Catalan Studies in the Department of Spanish and Portuguese at Indiana University, Bloomington. He has published Thinking Barcelona: Ideologies of a Global City (2012) and various articles on Marxism, politics, and architecture.

"What does it mean to survive today under global capitalism and global war? In this thoughtfully argued book, Edgar Illas takes up that challenge by examining how living bodies and institutions struggle for existence while at the same time producing forms of life able to withstand the drift of state of protection. Across a series of acute readings of political violence, Illas defines survival as the central question of our time, a necessary step to becoming active and miliant. The Surivival Regime urgently responds to boundless war at the end of the world." — Timothy Campbell, Department of Romance Studies, Cornell University.