The Swedish Jews and the Holocaust 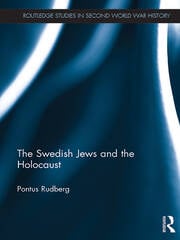 The Swedish Jews and the Holocaust

"We will be judged in our own time and in the future by measuring the aid that we, inhabitants of a free and fortunate country, gave to our brethren in this time of greatest disaster." This declaration, made shortly after the pogroms of November 1938 by the Jewish communities in Sweden, was truer than anyone could have forecast at the time. Pontus Rudberg focuses on this sensitive issue – Jewish responses to the Nazi persecutions and mass murder of Jews. What actions did Swedish Jews take to aid the Jews in Europe during the years 1933–45 and what determined their policies and actions?

Specific attention is given to the aid efforts of the Jewish Community of Stockholm, including the range of activities in which the community engaged and the challenges and opportunities presented by official refugee policy in Sweden.

5 The Swedish Jews and the Holocaust

Pontus Rudberg holds a PhD in history. He is currently a postdoctoral research fellow at the Hugo Valentin Centre at Uppsala University in Sweden.

"Pontus Rudberg has opened up yet another, and a new, chapter in the history of the Holocaust. How the relatively small Jewish community of Sweden responded to the catastrophe that took place just on their neutral border offers a fascinating picture of humanitarianism, solidarity, anxiety, and the limitations of possible action in the face of grave crisis."

"Good Samaritans or self-interested bystanders – how did Jews in neutral Sweden react to the predicament of European Jewry in the Hitler era? In this book, based on sound and careful scholarship, Pontus Rudberg examines a historical issue of profound moral consequence. He offers judicious and fairminded treatment of the conduct of the main institutions involved as well as insight into the motivations, attitudes, and human limitations of the chief protagonists. By turning the spotlight on this little-known aspect of Swedish and Jewish history, Rudberg illumines our understanding of individual and collective responses to the challenge posed by Nazi genocide."

"With his systematic approach based on a thorough investigation of the available sources, Rudberg succeeds in giving a comprehensive, detailed, and convincing account of the Swedish-Jewish rescue work in the period 1933 to 1945."