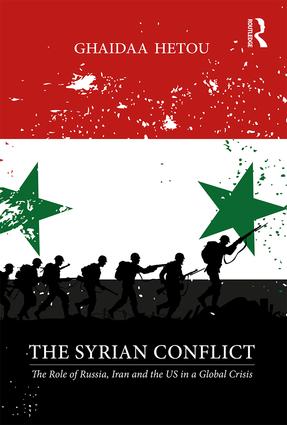 The Role of Russia, Iran and the US in a Global Crisis, 1st Edition

This book explores the global impact of the Syrian conflict, and the roles of Russia, Iran and the US in its wake. It looks closely at origins of political turmoil in the Middle East and North Africa (MENA) region by analysing the growing influence of Russia and Iran – militarily, economically and diplomatically – juxtaposed against US defense and national interests.

Drawing on detailed fieldwork and archival material, including National Security Archival documents, this book is a tour de force in understanding global politics and contemporary history. It will be indispensable to scholars and researchers of politics and international relations, political theory, foreign policy, Middle East studies, and peace and conflict studies.

"This is a truly important and exciting book! Syria may be the ‘1930's Spain’ of our time, and Hetou pulls back the curtain to show us how Russia and Iran are systematically using this war to replace American power east of Suez." — Norman Samuels, University Professor and Provost Emeritus, School of Criminal Justice, Rutgers University, USA

"The Syrian conflict, one of the most intractable and dangerous facing the world today, cries out for a deeper and more nuanced understanding. Dr Ghaidaa Hetou's study offers precisely the type of analysis which not only clarifies the conflict's complexities and multiple dimensions, but provides international policy-makers with the conceptual tools they need to bring the conflict to an end." — Eric Davis, Professor, Vice-Chair for Masters Studies, Department of Political Science, Rutgers University, USA

"A timely analysis of Syria and their relationships with Iran and Russia/USSR over the last few decades and in the near future. US policymakers and our allies must read this as they determine the art of the possible in the region as ISIS recedes and the civil war simmers." — Jason Criss Howk, Retired Army FAO and Middle East studies lecturer

List of plates. Preface. List of abbreviations. 1.Introduction: Syria Against All Odds 2. Resisting the Powerful: Iran and Syria Post-1979 3. 2011: The Onset of the Syrian Crisis and Iran’s Role 4. Russia and Syria since 1956: An Alliance Built on Defiance 5. Russia’s Intervention in Syria 6. Russia, China and Iran: A Changing World Order 7. The United States: Implications of New Realities in MENA 8. Conclusion. Appendix. Bibliography. Index