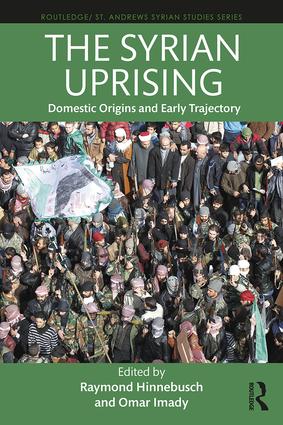 Most observers did not expect the Arab spring to spread to Syria, for a number of seemingly good reasons. Yet, with amazing rapidity, massive and unprecedented anti-regime mobilization took place, which put the regime very much on the defensive; what began as the Syrian Uprising in March 2011 has evolved into one of the world’s most damaging and protracted conflicts. Despite over six years having passed since the inception of the Syrian Uprising, this phenomenon remains difficult to fully grasp, both in terms of underlying forces and long-term implications.

This book presents a snapshot of how the Uprising developed in roughly the first two to three years (2011–2013) and addresses key questions regarding the domestic origins of the Uprising and its early trajectory. Firstly, what were the causes of the conflict, both in terms of structure (contradictions and crisis within the pre-Uprising order) and agency (choices of the actors)? Why did the Uprising not lead to democratization and instead descend into violent civil war with a sectarian dimension? With all 19 chapters addressing an aspect of the Uprising, the book focuses on internal dynamics, whilst a subsequent volume will look at the international dimension of the Uprising.

Taking an innovative and interdisciplinary approach that seeks to capture the full complexity of the phenomenon, this book contributes significantly to our understanding of the Syrian conflict, and will therefore be a valuable resource for anyone studying Middle Eastern Politics.

This volume is essential reading for anyone seeking to understand the tragic trajectory of Syria’s Uprising. Hinnesbusch and Imady have brought together a fascinating collection of chapters that explore the early years of the revolt against President Bashar al-Assad and why it transformed from largely peaceful demonstrations into a brutal, protracted civil war. As well as looking at why Assad proved more vulnerable than many expected and why people rose up against him, the editors seek to explain why the uprising ultimately failed to bring about democratic transition…some of the gems of this collection are those chapters focussing on under-explored dimensions of the crisis…for those seeking to understand how Syria reached its current, sad state, this volume would be an excellent place to start.

The popular tendency to attribute the Syrian uprising’s tragic evolution to some combination of sectarianism, external interference, or authoritarian path dependency often obscures the multilayered dynamics that shaped the conflict’s first years. From the vantage point of today, it is often easy to forget how the uprising emerged and spread, what actors were involved and why, and how Syrians navigated various sides of the ambiguously emerging political and sectarian divides. This volume is an excellent and timely reminder of the political diversity and the landscape of possibilities that existed in Syria and how different actors, ideas, and strategies shaped the early stages of the uprising. Far from suggesting a linear story, these contributions remind us of the intersecting elements that have driven the Syrian tragedy and is thus essential reading for anyone interested in the causes of the conflict and its various trajectories.

It is the first multi-disciplinary academic study to examine the internal dynamics of how the Syrian conflict evolved in the early years (2011-13), before foreign actors such as ISIS, Iran and Russia intervened and changed its course irrevocably. With media coverage these days focusing so much on these more recent developments, this volume promises to be an important corrective to remind us how it all began.

3. The Power of "Sultanism:" Why Syria’s non-violent protests did not lead to a democratic transition, Søren Schmidt

4. The Dynamics of Power in Syria: Generalized Corruption and Sectarianism, Stéphane Valter

5. The Uprising and the Economic Interests of the Syrian Military-Mercantile Complex, Salam Said

7. Tutelary Authoritarianism and the Shifts between Secularism and Islam in Syria, Line Khatib

11. Emergence of the Political Voice of Syria’s Civil Society: the Non-violent Movements of the Syrian Uprising, Tamara al-Om

12. Demands for Dignity and the Syrian Uprising, Juliette Harken

15. Sectarianism and the Battle of Narratives in the Context of the Syrian Uprising, Enrico Bartolomei

17. The Rise of Syrian Salafism: From Denial to Recognition, Issam Eido

18. From a window in Jaramana: Imperial sectarianism and the impact of war on a Druze neighbourhood in Syria, Maria Kastrinou

19. The Left in the Syrian Uprising, Ferdinand Arslanian

20. Political Incongruity between the Kurds and the ‘Opposition’ in the Syrian Uprising, Deniz Çifçi

21. Conclusion: The Early Trajectory of the Syrian Uprising: From Agency to Structure, Omar Imady and Raymond Hinnebusch

Raymond Hinnebusch is Professor of International Relations and Middle East Politics at the University of St Andrews and founder and director of the Centre for Syrian Studies. He is the author of numerous articles and books on Syria.

is Director for Outreach and Information Dissemination, Centre for Syrian Studies, University of St. Andrews. His professional experience combines practical fieldwork as a UN Officer in Syria and as an Academic Dean and he is the author of several UN reports, historical works, and analytic studies on Syria and the Middle East.

This series aims to be the major venue for the dissemination of research on modern Syria. Although it will not neglect Syria’s past, the focus is on the current conflict. It showcases work that locates cutting edge empirical research within innovative theoretical frameworks from all disciplines on, for example, social movements, civil wars, intervention, identity conflicts, failed states, post-war reconstruction, authoritarian resilience, and non-state governance.