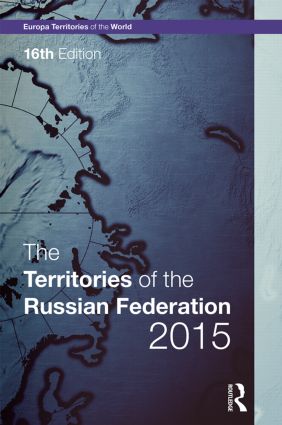 The Territories of the Russian Federation 2015

This excellent reference source brings together hard-to-find information on the constituent units of the Russian Federation.

The introduction examines the Russian Federation as a whole, focusing on Russian federalism and elections, followed by a chronology, demographic and economic statistics, and a review of the Federal Government.

The second section comprises territorial surveys, each of which includes a current map. This edition includes new surveys covering the recently annexed (and disputed) territories of Crimea and Sevastopol, as well as updated surveys of each of the other 83 federal subjects. The third section comprises a select bibliography of books. The fourth section features a series of indexes, listing the territories alphabetically, by Federal Okrug and Economic Area. Users will also find a gazetteer of selected alternative and historic names, a list of the territories abolished, created or reconstituted in the post-Soviet period, and an index of more than 100 principal cities, detailing the territory in which each is located.

'I don't know of any other information source which describes this important country in such a compact and up-to-date fashion.' - Reference Review

Part 1: Introduction Topical essay on the region. Chronology of Russia. Statistics. The Government of the Russian Federation. Part 2: Territorial Surveys. Map of European Russia. Map of Asian Russia. Surveys of each of the 83 Federal Subjects. Part 3: Select Bibliography Part 4: Indexes

Europa Territories of the World series