The Tet Offensive
A Brief History with Documents 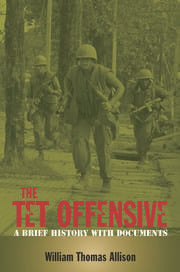 The Tet Offensive: A Brief History with Documents

With Americans turning against the war in ever greater numbers, struggles for power between the government and the military, and no end in sight to the fighting, the Tet Offensive of 1968 proved to be the turning point of the Vietnam War. In The Tet Offensive, historian William Thomas Allison provides a clear, concise overview of the major events and issues surrounding the Tet Offensive, and compiles carefully selected primary sources to illustrate the complex military, political, and public decisions that made up Tet.

The Tet Offensive is composed of two parts: an accessible, well-illustrated narrative overview, and a collection of core primary source documents. Throughout the narrative, historiographic questions are addressed within the text to highlight discussion among historians over pivotal points of debate. The objectively selected documents provide students with raw material from which to gain insight into these events through their own analysis, and to improve their ability to discuss and understand the importance of historical scholarship. Approachable and insightful, The Tet Offensive is not only a great introduction to reading history through primary sources, it is an essential tool for understanding what made the Tet Offensive such an important turning point of the Vietnam War.

"William Thomas Allison has produced an excellent, concise introduction to a critical episode in the Vietnam War.  The documents and illustrations add context and depth to an already-fine narrative.  This book will be valuable to new students and teachers of Vietnam alike."

-Robert Buzzanco, author of Vietnam and the Transformation of American Life

"This volume covers the period before, during, and after the Tet offensive of January 1968, in an effort to show why these events constituted the pivotal moment in turning Americans against the war in Vietnam. William Allison has fleshed out a nicely-written narrative with numerous illustrations, followed by documents, along with the views of historians, all encouraging the reader to form an independent assessment of the problems in getting out of war. An excellent work for the classroom, moderate in length, and guaranteed to stir student interest."

-Howard Jones, author of Death of a Generation: How the Assassinations of Diem and JFK Prolonged the Vietnam War

"The debate as to whether the Tet Offensive was a military victory and/or a psychological defeat for the United States has continued for nearly forty years. Professor Allison’s book places this debate in the proper context, by letting the voices of the participants speak for themselves, whether they be politicians or soldiers. His insightful commentary allows the reader to examine the primary documents with a clearer understanding of this critical event in American history."