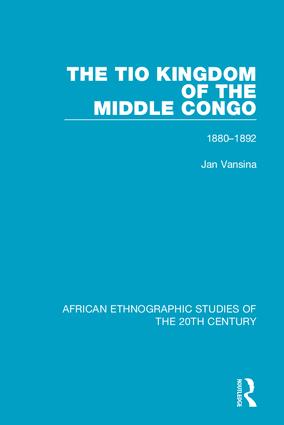 The Tio Kingdom of The Middle Congo

Originally published in 1973, this book reconstructs the political and economic organization and the social life of the Tio kingdom at the end of the 19th century by means of a critical synthesis of documentary and ethnographic data. Based on a detailed study of rich docuemntary sources and fieldwork, it analyses the persistent features of Tio social organization and political relations as well as the extensive economic changes associated with the development and later decline of caravan trading at Stanley Pool. It is fully illustrated with maps, tables and diagrams. This book shows the importance for both anthropoligical theory and historical interpreation of obtaining comprehensive data on the state of a particular society at a given time.

5. The Economics of Subsistence: Production

6. The Economics of Subsistence: Domestic Life

12. the Protectors: Lords and Squires

13. The Resolution of Conflict

15. The Kingdom Under Iloo Part 3: A Perspective Through Time