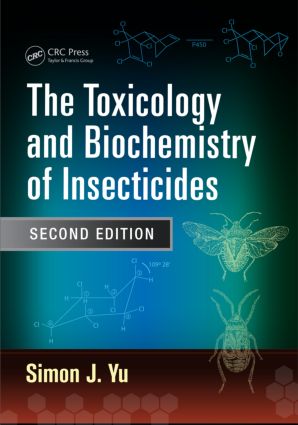 The Toxicology and Biochemistry of Insecticides

Despitetheir potentially adverse effects on nontarget species and the environment, insecticides remain a necessity in crop protection as well as in the reduction of insect-borne diseases. The Toxicology and Biochemistry of Insecticides provides essential insecticide knowledge required for the effective management of insect pests.

Continuing as the sole book in more than two decades to address this multifaceted field, the Second Edition of this highly praised review on insecticide toxicology has been greatly expanded and updated to present the most current information on:

Incorporating extensive reference lists for further reading, The Toxicology and Biochemistry of Insecticides, Second Edition is an ideal textbook for students of entomology, plant medicine, insecticide toxicology, and related agricultural disciplines. It is also a valuable resource for those involved in insecticide research, environmental toxicology, and crop protection.

"Overall, this is a carefully crafted treatment of a difficult subject, and Simon Yu has successfully walked the fine line between too much and not enough detail. Importantly, he does an excellent job explaining why certain things are important to toxicologists, and what should be of interest to managers of insect pests. Also, he provides a holistic treatment that has something of interest for everyone, and it is presented in an easily comprehended manner. If you work with insecticides, and especially if you don’t, you need to read this book. There is a great deal of misinformation about pesticides in the world, but this book is a great source of enlightenment."

Praise for the First Edition

"… applicable to a diversity of students from entomology, pest management and related agricultural disciplines. … provides an updated and comprehensive introductory textbook for students of insecticide toxicology that incorporates traditional toxicological concepts, including uptake, mode of action, and principles of xenobiotic metabolism with an up-to-date cataloging of both historically important insecticide classes and novel chemistries and their mode of action. This information provides a solid foundation for developing more complex issues, such as the role of xenobiotic metabolism as it relates to selective toxicity and resistance evolution. … presents material in an easy-to-read outline that is well organized. … illustrated with many line drawings and tables providing the reader with ample opportunity to interpret data that enhances understanding of a certain topic. … This text is a valuable basic reference for students of insecticide toxicology. … I have recommended the text for my own course and have received positive feedback from a diversity of students."

"This is a great book detailing everything you might wish to know about the entomological toxicology, biochemistry, and indeed the physiology, sensitivities and resistance to, mode of action, purpose and range, regulation, and environmental fate, of pesticides—and more besides. The division into 11 chapters is amply signposted in a set of more-than-adequate contents pages. If that should fail you in locating what you are looking for, then the index at the rear will see you right. … Each chapter flowed nicely into and introduced the next, and the book had a very reasonable style (even the bits on mono-oxygenases). I loved reading about spiracles and their significance (or not) in pesticide absorption. It covered topics in useful depth, but facts were easy to find and were not hidden beneath layers of waffle or arcane language. It would serve as an invaluable reference tool to toxicologists (and agronomists, biochemists, teachers, entomologists, students, and ecologists …) coming into contact with insecticides."

"If you are interested in more general aspects of insecticides, the chapters on formulation and the mode of action of insecticides are good, and the section in chapter 5 on probits is one of the best written I have seen."

Preface to the First Edition

Need for Pesticides and Their Pattern of Use

Other Provisions of FIFRA

Source of Variability in Dose–Response Tests

Use of LDP Lines

Penetration of Insecticides through the Insect Cuticle

Movement of Insecticides through the Cuticle

Metabolism of Insecticides in the Cuticle

Entry via the Mouth

Uptake via the Spiracles

Mode of Action of Insecticides

Mode of Action of the DDT Group, Pyrethroids, Indoxacarb, Sabadilla, and Metaflumizone

Mode of Action of Organophosphorus and Carbamate Insecticides

Mode of Action of Baculovirus Insecticides

Mode of Action of Acaricides

Acaricides Interfering with Growth and Development

Mode of Action of Insect Repellents

Species Differences and Other Phenomena Associated with the Metabolism of Xenobiotics

Evolution of Species Differences in Detoxification

Effect of Age and Sex on Enzyme Activity

Dominance and Number of Genes

Rate of Development of Resistance

Use of Insecticide Mixtures and Rotations

Use of Insecticide Synergists

Use of New Pesticides

Use of Resistant Predators and Parasites

Use of Transgenic Crops

Pesticides in the Environment

Persistence of Pesticides in Soil

Pesticides and the Food Chain

Sublethal Effects of Pesticides on Wildlife

Biomarkers as Indicators of Pesticide Pollution

Simon J. Yu is professor emeritus at the University of Florida, Gainesville, USA. He holds a BS from National Taiwan University, Taipei, and an MS and Ph.D from McGill University, Montreal, Quebec, Canada. After completing postdoctoral studies at Cornell University, Ithaca, New York, USA, and Oregon State University, Corvallis, USA, he served as assistant professor at Oregon State from 1974 to 1979. He moved to the University of Florida in 1980, and was promoted to associate professor in 1982 and professor in 1986. He retired from the university in 2006, but remains an emeritus faculty. His research has been supported by USDA, NSF, NIH, EPA, and various pesticide companies.