The Trauma of Terrorism
Sharing Knowledge and Shared Care, An International Handbook 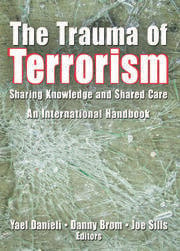 The Trauma of Terrorism: Sharing Knowledge and Shared Care, An International Handbook

Learn intervention strategies to counter the effects of terrorism

In the twenty-first century, terrorism has become an international scourge whose effect devastates individuals, weakens societies, and cripples nations. The Trauma of Terrorism: Sharing Knowledge and Shared Care, An International Handbook and Shared Care provides a comprehensive, penetrating look at the effects of terrorism, at the prevention and treatment of immediate and long-term sequelae, at preparedness for terrorism, and at the range of individual, community, and national responses. International authorities discuss the latest knowledge and research about terror, its root causes, and its psychological impact on individuals, families, societies, and nations, as well as the societal and political responses and services that may help lessen its impact.

The Trauma of Terrorism: Sharing Knowledge and Shared Care, An International Handbook analyzes the full scope of terrorism. This compendium explores numerous issues in detail, such as the nature and psychology of terrorism, how to foster a community’s capacity for resilience, the psychosocial consequences of terrorism in children and adults, the centrality of traumatic grief, the need for multicultural understanding in services and treatment, interventions for children and adolescents, training programs for mental health professionals, and proactive community organization in the face of terrorism. Treatment options and services are thoroughly explored and their effectiveness evaluated. Chapters are international in scope, well-referenced, and geared to provide thoroughly reasoned recommendations to lessen the effects of terrorism. Original witness voices from survivors and professionals worldwide give depth to the scientific character of the book. Helpful tables and graphs clearly illustrate data and ideas.

The Trauma of Terrorism: Sharing Knowledge and Shared Care, An International Handbook presents in-depth examinations of:

The Origins of Terrorism in Modern Society