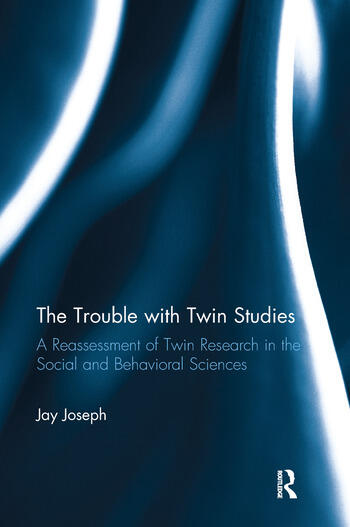 The Trouble with Twin Studies: A Reassessment of Twin Research in the Social and Behavioral Sciences

The Trouble with Twin Studies questions popular genetic explanations of human behavioral differences based upon the existing body of twin research. Psychologist Jay Joseph outlines the fallacies of twin studies in the context of the ongoing decades-long failure to discover genes for human behavioral differences, including IQ, personality, and the major psychiatric disorders. This volume critically examines twin research, with a special emphasis on reared-apart twin studies, and incorporates new and updated perspectives, analyses, arguments, and evidence.

Jay Joseph, PsyD., is a licensed psychologist practicing in the San Francisco Bay Area. Since 1998 he has published two books, several book chapters, and many articles in peer reviewed journals, where he has presented a critical appraisal of genetic theories and research in psychiatry and psychology.

"Joseph (a practicing psychologist) presents a meticulously detailed albeit polemical critique of behavior genetics in general and the twin studies technique in particular. ... Though complex, the material is carefully presented and should be accessible to students of psychology and biology. The book is particularly valuable for bringing together political and scientific issues. Summing Up: Highly recommended. Upper-division undergraduates through faculty and professionals." -- J. Mercer, emerita, Stockton University, in CHOICE, July 2015

"The Trouble with Twin Studies significantly adds to Jay Joseph’s impressive record of scholarship critiquing the conceptual and methodological flaws of research claiming to document a genetically-determined basis of human behavior and development. This book provides an insightful and important analysis of the flaws of claims derived from twin research that, independent of coactions with the environment, genes alone or in large part determine human psychological and social attributes. This title is essential reading for basic and applied scholars interested in understanding the inadequacies of simplistic, genetic-reductionist accounts of human development." -- Richard M. Lerner, Director, Institute for Applied Research in Youth Development, Tufts University

"Jay Joseph exposes the fundamentally flawed assumptions held by researchers who use twins to study the genetics of human behavior, bolstering his criticisms with the words of the researchers themselves. This is a must-read for biology teachers, geneticists seeking genes for human behaviors, psychiatrists, and all of us who learned in school about nature’s supposedly "perfect experiment" - the study of identical twins."

"This book is an astonishingly detailed and comprehensive dissection of the results of all the major twin studies, and the vaulting claims of twin researchers. It reveals the simplistic notions about genes and environments and the preposterous idea that their effects on human variation can be separated. Joseph then exposes the often-shoddy, corner-cutting methods through which that impossible dream has been pursued. This book will be an invaluable resource to those who suspect that twin studies are too good to be true, and want to articulate the arguments that encourage wider views of the causes of human variation."

"Joseph’s analysis of the twin studies is a masterpiece in both breadth and depth. If you have always been skeptical of claims about genes for mental illness then you owe Joseph a debt of gratitude. The Trouble with Twin Studies shows that often made claims about genes and mental health are laid bare."  -- Jonathan Leo, PhD, Professor of Neuroanatomy, Lincoln Memorial University

"[A] meticulously detailed [...] critique of behavior genetics in general and the twin studies technique in particular. [...] Though complex, the material is carefully presented and should be accessible to students of psychology and biology. The book is particularly valuable for bringing together political and scientific issues. Summing Up: Highly recommended." -J. Mercer, emerita, Stockton University, CHOICE