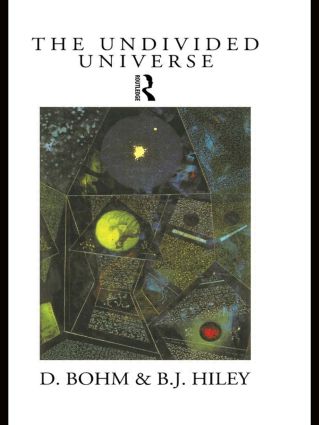 In the The Undivided Universe, David Bohn and Basil Hiley present a radically different approach to quantum theory. They develop an interpretation of quantum mechanics which gives a clear, intuitive understanding of its meaning and in which there is a coherent notion of the reality of the universe without assuming a fundamental role for the human observer.

With the aid of new concepts such as active information together with non-locality, they provide a comprehensive account of all the basic features of quantum mechanics, including the relativistic domain and quantum field theory.

It is shown that, with the new approach, paradoxical or unsatisfactory features associated with the standard approaches, such as the wave-particle duality and the collapse of the wave function, do not arise. Finally, the authors make new suggestions and indicate some areas in which one may expect quantum theory to break down in a way that will allow for a test.

The Undivided Universe is an important book especially because it provides a different overall world view which is neither mechanistic nor reductionist. This view will ultimately have radical implications not only in physics but also in our general approach to all areas of life.

'This is a brilliant book, of great depth and originality. Every physicist and physics student who wants to understand quantum mechanics should read this book.' - Physics Today

'One of the most important works on quantum theory to appear during the last twenty years.' - Journal of Consciousness Studies

'This is a rich and stimulating book. It is indispensable reading for anyone with a serious interest in the interpretation of quantum theory.' - John Polkinghorne

'You will be very impressed by this wise and deep book that will certainly broaden your horizens and start you thinking about many things you thought you were sure of.' - Science

'This book disturbs the reader, because the profound originality of its thinking differs so much from mainstream physics and from what the new age has made of physics. It could be that it will in the course of time disturb also the course of physics.' - Network