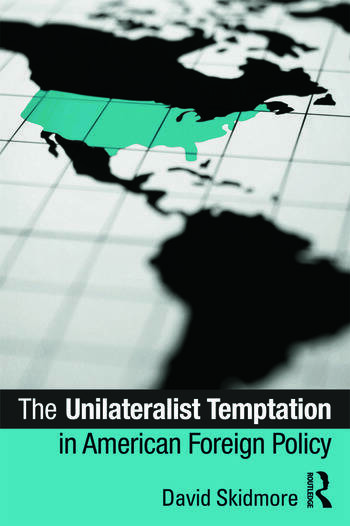 The pattern of multilateral engagement and unilateral retrenchment in American foreign policy from the Cold War through the Clinton, Bush, and Obama years presents a puzzle. What accounts for the unilateralist turn? Is it a passing aberration attributable to the neoconservative ideology of the Bush administration? What then of the disengagement evident earlier during Clinton’s presidency, or its continuation under Obama? Was the U.S. investment in multilateral institutions following World War II an anomaly? Or is the more recent retreat from international institutions the irregularity?

Skidmore traces U.S. unilateralism to the structural effects of the end of the Cold War, both domestically and abroad, to argue that the United States was more hegemonic than multilateralist—a rule-maker, not a rule-taker. An "institutional bargain" existed under the Cold War threat from the Soviets, but absent those imperatives the United States has been less willing to provide collective goods through strong international institutions and other states are less willing to defer to U.S. exemptions. On the home front, the post-Cold War political environment has made it more difficult for presidents to resist the appeals of powerful interests who are threatened by multilateral commitments.

This book demonstrates that American unilateralism has deeper roots and more resilience than many expect. The unilateral temptation can only be overcome through new political bargains domestically and internationally that permit multilateral engagement, even the absence of great power rivalry.

"In this volume, David Skidmore offers a careful and sobering assessment of the tenacity of unilateralism in U.S. foreign policy over time. Skidmore also shows how President Barack Obama has been unable so far to counteract the underlying structural obstacles to a more mulitlateralist foreign policy. This volume’s last chapter should be a ‘must read’ for U.S. foreign policy makers committed to making U.S. foreign policy more effective by increasing its legitimacy in the eyes of others."
—Ralph G. Carter, Texas Christian University

"In The Unilateralist Temptation in American Foreign Policy, David Skidmore laments the lack of multilateralism in American foreign policy and outlines a structural explanation—several important international and domestic constraints—to account for it.  Although the Cold War years yielded greater multilateralism by the United States, Skidmore argues, the post-Cold War years are more challenging for such international collaboration by any administration, regardless of ideological orientation. A provocative read."
—James M. McCormick, Iowa State University

"Those who were hoping for, or predicting, a more multilateral U.S. foreign policy under Barack Obama will continue to be disappointed, argues David Skidmore. And they are going to have to respond to Skidmore’s lucid argument and abundant evidence that Presidents, Democratic and Republican, are pushed by international and domestic factors to exempt America from international rules."
—John Owen, University of Virginia