The United States, International Law, and the Struggle against Terrorism 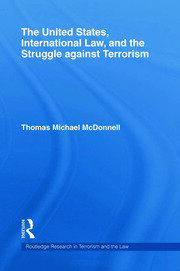 The United States, International Law, and the Struggle against Terrorism

This book discusses the critical legal issues raised by the US responses to the terrorist threat, analyzing the actions taken by the Bush administration during the so-called "War on Terrorism" and their compliance with international law. Thomas McDonnell highlights specific topics of legal interest including torture, extra-judicial detentions and the invasions of Afghanistan and Iraq, and examines them against the backdrop of terrorist movements which have plagued Britain and Russia. The book extrapolates from the actions of the USA, going on to look at the difficulties all modern democracies face in trying to combat international terrorism.

Acknowledgements.  List of Abbreviations.  Preface  1. The West’s Colonization of Muslim Lands and the Rise of Islamic Fundamentalism  2. "The Global War on Terrorism": A Mislabeling of the Terrorist Challenge?  Part 1: Imprisoning Suspected Agents of Terror  3. "Torture Light"  4. Torture Heavy  5. The Allure of the "Ticking Time Bomb" Hypothetical  6. Beyond Locking ’Em Up and Throwing Away the Key? Indefinite Detention, Habeas Corpus, and the Right to a Fair Trial  Part 2: Stopping Terrorists on the Ground  7. Acceptable "Collateral Damage"? Taking Innocent Life in Conducting the "War on Terrorism"  8. Assassinating Suspected Terrorists: "The Dark Side" of the War on Terror?  9. Carrying out the Death Penalty in the "War on Terrorism": Getting Just Desert or Creating Martyrs?  10. Ethnic and Racial Profiling: Counter Productive in the "War on Terrorism"?  Part 3: Invading and Occupying Muslim Countries  11. The Invasion and Occupation of Iraq: Aggression or a Justified Resort to Force?  12. The Invasion and Occupation of Afghanistan: The Legal Challenge Posed by the Haven State   13. Conquest, Colonization and the Right of Self-Determination.  Glossary.  Index

Thomas McDonnell is a Professor of Law at Pace University, USA.