The Urban Fix
Resilient Cities in the War Against Climate Change, Heat Islands and Overpopulation 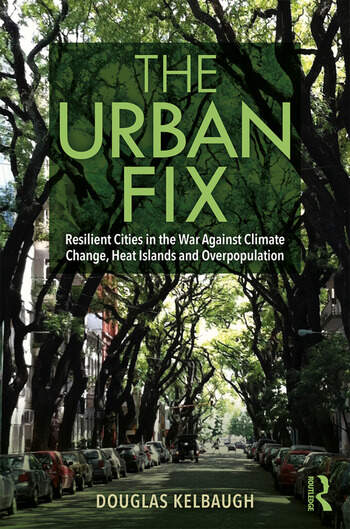 The Urban Fix: Resilient Cities in the War Against Climate Change, Heat Islands and Overpopulation

Cities are one of the most significant contributors to global climate change. The rapid speed at which urban centers use large amounts of resources adds to the global crisis and can lead to extreme local heat. The Urban Fix addresses how urban design, planning and policies can counter the threats of climate change, urban heat islands and overpopulation, helping cities take full advantage of their inherent advantages and new technologies to catalyze social, cultural and physical solutions to combat the epic, unprecedented challenges humanity faces.

The book fills a conspicuous void in the international dialogue on climate change and heat islands by examining both the environmental benefits in developed countries and the population benefit in developing countries. Urban heat islands can be addressed in incremental, manageable steps, such as planting trees and painting roofs white, which provide a more concrete and proactive sense of progress for policymakers and practitioners. This book is invaluable to anyone searching for a better understanding of the impact of resilient cities in the monumental and urgent fight against climate change, and provides the tools to do so.

Doug Kelbaugh FAIA FCNU, with two degrees from Princeton University, USA, has been an acclaimed educator and practitioner who has won over 20 design awards and competitions over the past four decades. He speaks internationally, publishes voluminously and teaches the largest elective offered by his college at the University of Michigan, USA, where he is a Professor and Dean Emeritus. He has authored and edited six books and many book chapters on livable, lovable and resilient architecture and cities. The AIA and ACSA awarded Professor Kelbaugh the 2016 Topaz Medallion for Excellence in Architectural Education, the highest award in the field, noting that he has bridged the fields of architecture, sustainability and urbanism as much as any member of his generation.

"Building dense, walkable cities is the key to a lot of things, including— as Kelbaugh persuasively argues— building momentum in the climate fight. This is the kind of creative thinking a crisis moment requires!" -Bill McKibben, Schumann Distinguished Scholar, Middlebury College, USA

"This book’s highly original linking of local urban heat island effects to global climate change is the game changer we need to advocate for urbanism as the key to mitigating climate change while adapting our rapidly warming cities to its consequences." -Ellen Dunham-Jones, Professor of Architecture, Georgia Institute of Technology, USA

"The role of the built environment in fighting climate change and urban heat islands is vastly underplayed in the media. Doug Kelbaugh has written a definitive and comprehensive book on the urban impacts and antidotes in this profound challenge that threatens civilization and life itself." -Edward Mazria FAIA FRAIC, Founder of AIA2030, USA

"Using the impact of urban heat island effects and severe heat waves as a wake-up call in this very timely book, Kelbaugh explains the many dimensions of ‘urban paradoxes’ and in the process makes the most compelling, comprehensive case for why cities are not only our biggest challenge, but also our last and best hope to combat climate change." -Harrison Fraker, Professor and Dean Emeritus, College of the Environment, University of California at Berkeley, USA

"Doug was awarded the 2016 Topaz Medallion for Excellence in Architectural Education, the highest award in the field… His life of teaching and professional practice has allowed him to deepen the book’s content. The Urban Fix is arguably the most comprehensive and definitive book on how cities combat climate, urban heat islands and overpopulation." -Peter Calthorpe, Principal at Calthorpe Associates, Berkeley, California, USA