The Urban Struggle for Economic, Environmental and Social Justice
Deepening their roots 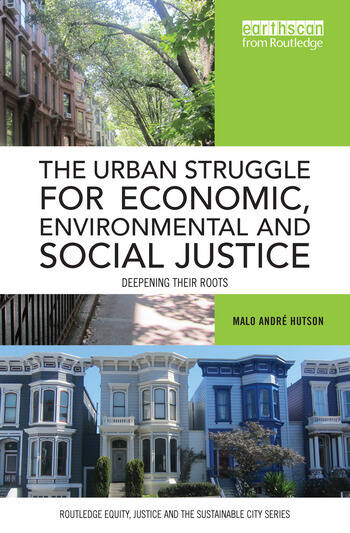 The Urban Struggle for Economic, Environmental and Social Justice: Deepening their roots

This book discusses the current demographic shifts of blacks, Latinos, and other people of colour out of certain strong-market cities and the growing fear of displacement among low-income urban residents. It documents these populations’ efforts to remain in their communities and highlights how this leads to community organizing around economic, environmental, and social justice. The book shows how residents of once-neglected urban communities are standing up to city economic development agencies, influential real estate developers, universities, and others to remain in their neighbourhoods, protect their interests, and transform their communities into sustainable, healthy communities. These communities are deploying new strategies that build off of past struggles over urban renewal. Based on seven years of research, this book draws on a wealth of material to conduct a case study analysis of eight low-income/mixed-income communities in Boston, New York, San Francisco, and Washington, DC.

This timely book is aimed at researchers and postgraduate students interested in urban policy and politics, community development, urban studies, environmental justice, urban public health, sociology, community-based research methods, and urban planning theory and practice. It will also be of interest to policy makers, community activists, and the private sector.

Malo André Hutson is assistant professor in the Department of City and Regional Planning at the University of California at Berkeley, USA, and associate director of the Institute of Urban and Regional Development. He is also a faculty affiliate of the UC Berkeley/UCSF Medical School Robert Wood Johnson Foundation Health and Society Scholars program

"At last, a book that looks at some of the ways in which gentrification has been reined in. The book provides a wide-ranging and largely convincing account of the alliances that have made possible some legal constraints to be placed on unrestrained gentrification" –Tim Butler, King’s College London, UK

"Hutson (Univ. of California Berkeley) tries to understand the rapid and unrestrained gentrification occurring in “strong-market cities such as Boston, New York City, Seattle, San Francisco, Washington, DC,” with their attendant displacements of poor and working-class populations. Important topics include the demographic shift back into cities; the awakening of marginalized urban communities of color; the cases of academic and medical institutions expanding into surrounding poor neighborhoods; the struggle of residents to hold government and developers accountable; and the efforts of community organizations to promote equitable development for local residents and provide more community control over land use and planning. The dynamic of economic crises involving home foreclosures and unemployment has bolstered community development grassroots efforts. Grassroots community development is seen as a way to bring about healthy, sustainable, urban communities with reduced displacement, poverty, and inequality. The new policies encouraging public/private partnerships to improve economic, environmental, and social dimensions of low resource urban communities are seen as the solution. The point of the book is that political organizing and strong community coalitions can keep government and private developers accountable to neighborhood residents." - C. Wankel, St. John's University, CHOICE