The Urban Wisdom of Jane Jacobs 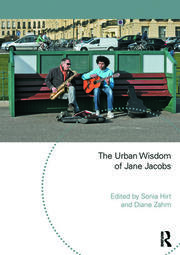 The Urban Wisdom of Jane Jacobs

Here for the first time is a thoroughly interdisciplinary and international examination of Jane Jacobs’s legacy. Divided into four parts: I. Jacobs, Urban Philosopher; II. Jacobs, Urban Economist; II. Jacobs, Urban Sociologist; and IV. Jacobs, Urban Designer, the book evaluates the impact of Jacobs’s writings and activism on the city, the professions dedicated to city-building and, more generally, on human thought. Together, the editors and contributors highlight the notion that Jacobs’s influence goes beyond planning to philosophy, economics, sociology and design. They set out to answer such questions as: What explains Jacobs’s lasting appeal and is it justified? Where was she right and where was she wrong? What were the most important themes she addressed? And, although Jacobs was best known for her work on cities, is it correct to say that she was a much broader thinker, a philosopher, and that the key to her lasting legacy is precisely her exceptional breadth of thought?

Sonia Hirt is Associate Dean of the College of Architecture and Urban Studies at Virginia Tech, USA.

Diane Zahm is Co-chair of the Department of Urban Affairs and Planning at the College of Architecture and Urban Studies at Virginia Tech, USA.

"Today’s students would enjoy reading the recent book. The chapters are short, the language clear, and the implications global, and it would help develop their critical capacities and depth of understanding. These are qualities Jacobs considered vital for universities to cultivate, rather than the credentials race she criticized in her final book, Dark Age Ahead." – AAG Review of Books, Briavel Holcomb, Rutgers University, USA

"This new collection of essays takes on a great task with variety, ease, and precision... The essays are short and dense, so the reader can get to the core of the matter, something Jacobs would have liked." - Journal of Urban Affairs

"A rich collection of essays from a wide range of thoughtful contributors...The breadth and depth of this collection is impressive, including an analysis of Jacobs's eyes-on-the-street framework in the context of crime in the 21st-century built environment. Her principles are also analyzed in the context of such diverse topics and contexts as urban form in medieval China, open and public space in Thailand, and redevelopment in Beirut." - Journal of the American Planning Association, May 2013

"The book, The Urban Wisdom of Jane Jacobs, follows a structure of her main contributions as philosopher, urban economist, urban sociologist and urban designer, trying to go beyond the general assumption of Jane Jacobs as only-urbanist and offering an extensive perspective of how she was able to build a strong vision of urban life from different perspectives." - Manu Fernandez, Ciudades a escala humana, August 2012